He wants her body and heart, but a killer wants her soul.

Can he and the woman of his dreams escape her waking nightmare?

How I Wrote the Villain in Deadline
by Scarlet Hawthorne

Devolution – The process by which an UNSUB begins to lose control, falling in a downward spiral, unable to control their urge to perform a particular offense brought about by the trauma of their offenses. The rapid movement from “Organized” to “Disorganized.”  -- From the Criminal Minds glossary, criminalmindsfanwiki.com.

I primarily wrote Deadline in a panoramic point of view, as if the reader is watching a film, with no inner monologue of the hero or heroine. We learn their thoughts and feelings by what they say and how they behave – just as we do with people in our own lives. No one ever knows what anyone is thinking. I digress from this narrative technique with the villain in the story by allowing the reader into his head and “hear” the delusions of this mad man.

Clearly mentally ill, he may have developed schizophrenia in his twenties, which went unnoticed because of his ability to function “normally” and rationalize any paranoia to others. His delusions have been focused on religion, but now he believes God is speaking to him and has chosen him for a mission.

On the television program Criminal Minds, the BAU would probably identify him as a highly-organized “UNSUB” (unknown subject) who has had recent stressors in his life, which caused his break with reality; but the circumstances of his third killing indicate that he is devolving rapidly.

We see his devolution accelerating while we are in his head, finding that he believes God is actually assisting him in his pursuit of the target of his delusions. At first he takes lines from the Bible out of context and applies them to himself as an Angel of God, as well as to his victims as sinners deserving of their punishment. By the end, he is grasping at anything, from Biblical passages to Jewish mythology and even Greek lyrical poets.

He is now in the middle of a full psychotic break. And the focus of his psychosis is Gillian Tate.

What peace, so long as your whoredoms and witchcrafts are so many?

By her teaching she misleads my servants into sexual immorality and the eating of food sacrificed to idols. I have given her time to repent of her immorality, but she is unwilling. Rev 2:20-21

The Sword of Michael the Archangel

Scarlet lives with her two dogs and their Master in a lakeside community in the New Orleans area. Her next release is the contemporary male/male romance Between the Notes, expected in spring, 2015. 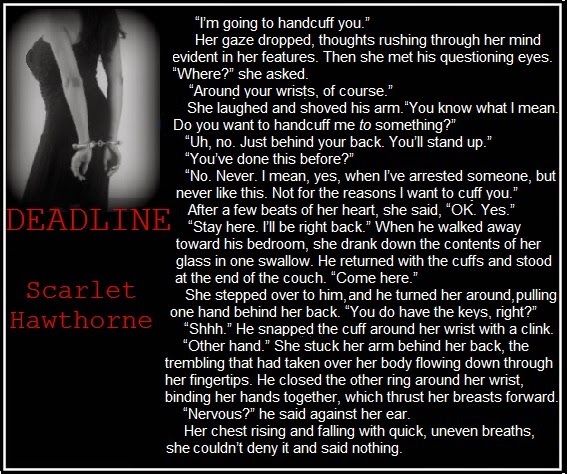