Black is the Colour 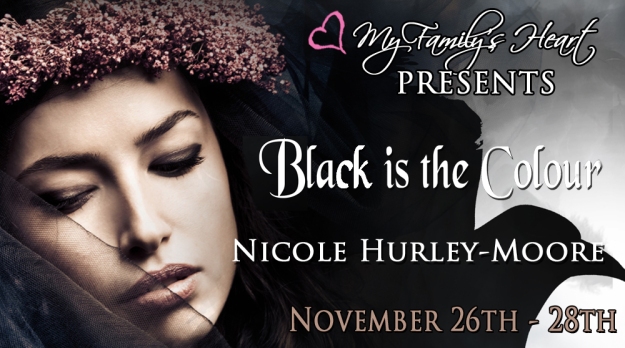 Ciana has loved Oran all her life and nothing, not even her father will prevent them from being together. But the Mayor of Stonemark has higher aspirations for his daughter than the village blacksmith. He engages the help of a witch and dark magic to bend Ciana to his will.
Oran knows that he doesn’t deserve Ciana. But their love is stronger than the metal he forges and welds. She has his heart and he will never turn from her no matter the cost.
Separated, Ciana will need all her strength to journey through the deep forest and save Oran from the witch’s curse. Alone and with only a trail of black feathers to follow, Ciana will fight against the odds and attempt to bring her lover home.
Round double, double you go, Until black feathers upon you grow. Beak and claw, talon and wing, Now with raven’s voice you shall sing. To the heavens you shall fly, It is my will – So say I.

I was given book for honest review. Fairytale like romance with a rebellious daughter who fights to regain her true love. An evil witch and a wicked curse with a trail of black feathers leading the way. Should Ciana follow her true love Oran into the whirlwind of evil? If they go into the woods will they ever come out? And truer words can never be spoken “What care I for a dress.”

Oran’s arms were around her, holding her tight. She snuggled against him to capture his warmth. Outside the wind had picked up. It caused the branches to scratch against the cottage walls. Ciana closed her eyes but there was something that wouldn’t let her sleep. She tilted her head back and looked at Oran. His eyelids flickered for an instant before closing altogether. His dark hair had fallen forward and obscured part of his face. Reaching up, Ciana brushed it back. “You should sleep. The dawn will be here soon enough and we have a long journey ahead of us,” he said as he tightened his grasp. “I know, but I can’t settle... it’s as if...” “What?” “Oh, I don’t know. It’s as if something isn’t right.” “All is well, my love,” he answered sleepily. “It’s been an eventful day. You’re worried that your father will come after us but we will soon be far beyond his reach.” “I suppose you’re right.” “We’ll be long gone before he even returns. Fear not,” he said as he kissed her shoulder. “We’ll be at Havensport in three days and the very thought of Stonemark will be far behind us.” “I’m sure that’s true,” Ciana said as she closed her eyes and willed herself to fall asleep. But the wind shrieked and circled the cottage and Ciana could not shake the feeling of foreboding. “Of course I’m right. There is nothing to worry about...” The door burst open with a bang. The wind tore around the room, circling the bed. With it came leaves, sticks and debris from the woods. Oran threw himself over Ciana in an attempt to shield her from the maelstrom. The wind howled like a banshee and the bed shook, until she was sure that both of them would fall. “What’s happening?” Ciana shouted. “I don’t know – but nothing natural I’ll wager,” Oran said as buried his head above hers. “Just hold on, love and wait for it to pass.” But it didn’t. The wind became stronger and rattled the cottage until Ciana thought the whole thing would blow away. Ciana wrapped her arms around Oran’s waist but let out a cry as a branch dragged across her forearm, scratching and snagging her flesh until it bled. “Put your arms beneath me and keep down – I’ll protect you.” “But who will protect you?” “I’ll be fine as long you’re safe. Everything will be...” Oran broke off as the wind tugged at his body. It began to lift him up. Ciana grabbed his arms and tried to anchor him to her. “You can’t have him!” she screamed against the circling wind. “You can’t have him!” Oran held on to the rough wooden bed head and she felt his muscles strain and bulge as he gripped on. “Ciana, I...” The vortex spun quicker around the room. Noise thundered in Ciana’s ears as she was buffeted by more twigs, leaves and black feathers. She held onto Oran until her knuckles were white and her nails dug into his skin. “I won’t let you go.” His dark eyes locked onto hers for a moment. “I love you.” “Nay, I won’t let you go...” But even as the words fell from her lips her grip slipped. The force of the wind lifted Oran off the bed. The leaves swirled around him and swallowed his body so only his outstretched arms and head were visible. The strength of the whirlwind wretched Oran from Ciana’s grasp, the bed head snapped and with one final look Oran was dragged off the bed, back through the open door and into the night dark wood.

Nicole has always been a lover of fairy tales, history and romance. She grew up in Melbourne and Central Victoria and has travelled extensively. Her first passion in life has always been her family, but after studying and achieving her BA in History and Honours in Medieval Literature, she devoted her time to writing historical, fantasy and contemporary romance. She is a full time writer who lives in the Central Highlands of Victoria with her family, where they live in the peaceful surrounds of a semi-rural town.