Red the Were Hunter Blitz

Red The Were Hunter is being published on May 1, 2014. Red is a Fantasy Romance which took 2nd place in the Hook, Line and Sinker contest and is a current finalist in the Great Beginning Contest. It is the first novel in the Farielle book series.


What if you were the key to an ancient prophecy that would begin to heal your lands, but fulfilling your destiny meant you had to turn your back on everything you'd been taught to believe in?

Redlynn of Volkzene, member of the Sisterhood of Red, is heartbroken to discover another girl kidnapped and her best friend slain by werewolves. Defying the head of her order, she sets out to kill the beast she believes responsible. The King of the Weres-- But there are worse things inWolvenglen Forest than the wolves.

Adrian, reluctant heir to the throne of Wolvenglen, and his band of wolf brothers are bound to protect the humans; especially the Sisterhood. Finding Redlynn unconscious in his woods, awakens in him a passion he's never before experienced and a protective instinct that has him ready to turn on his own men. Problem is, a female is the last thing Adrian needs complicating his life.

But all is not as it seems in Wolvenglen Forest and to save the missing girls before time runs out, Redlynn and Adrian must move past their inner demons and learn to trust each other. Perhaps finding the happiness they both so desperately desire. 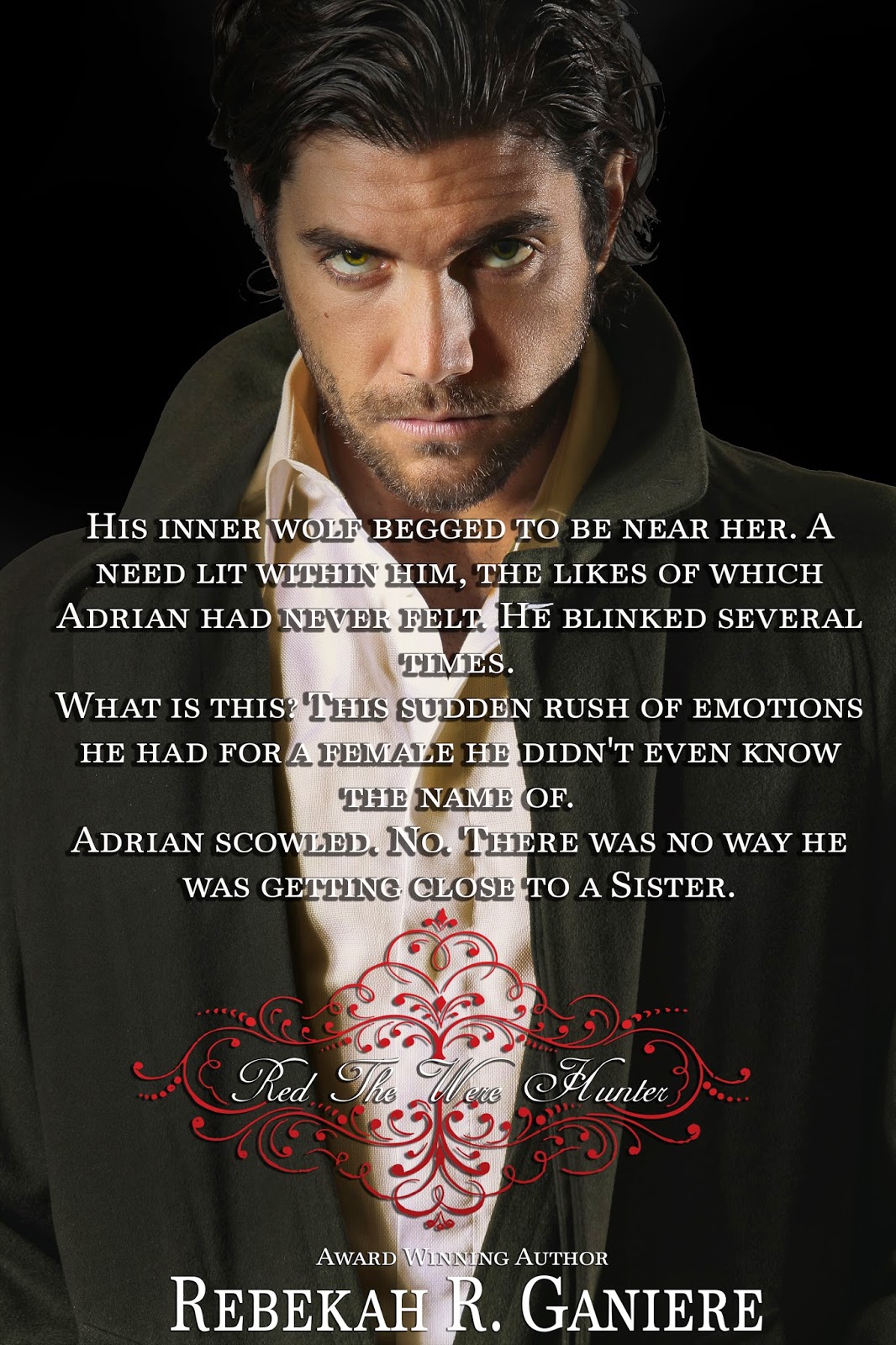 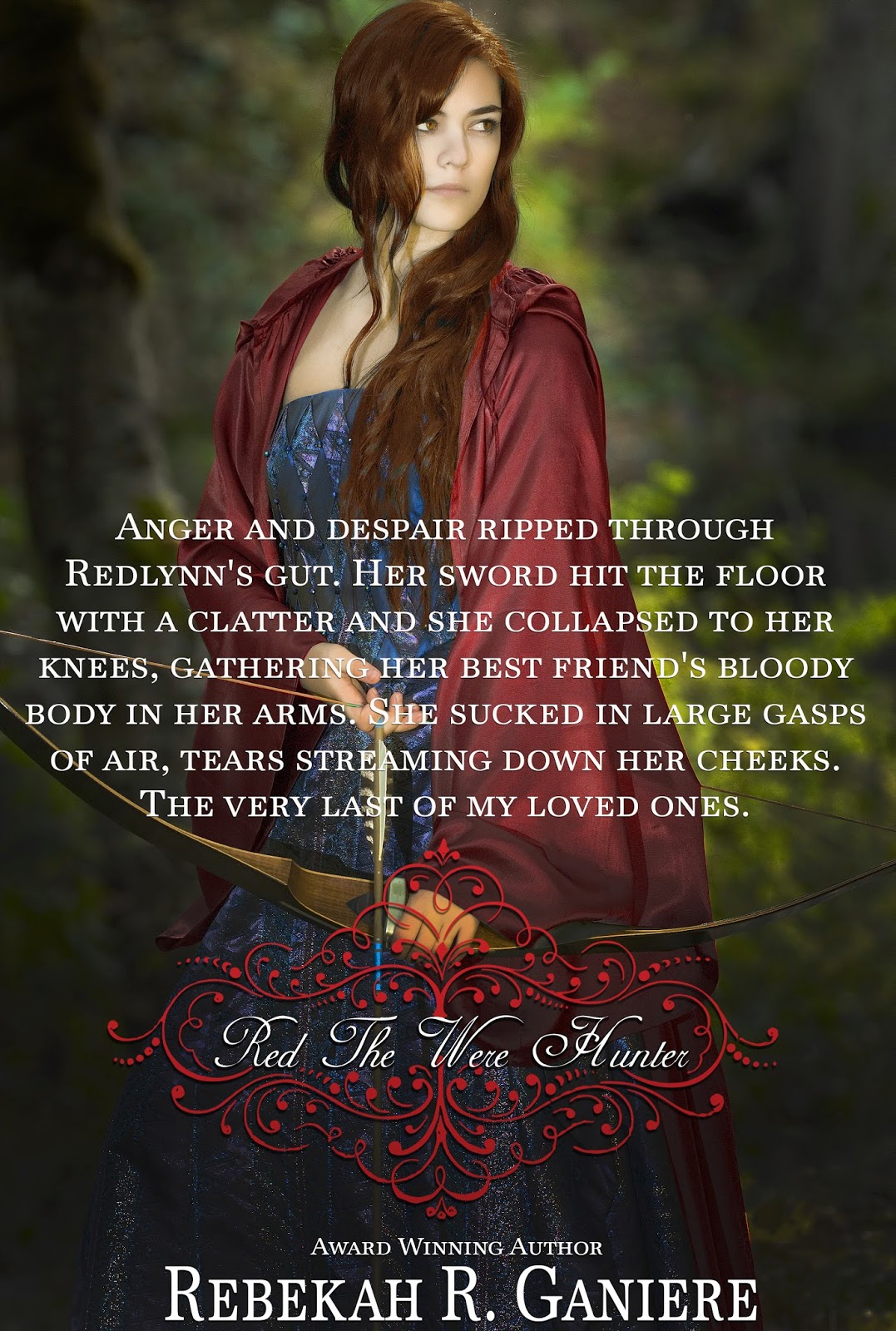 Another girl had been taken. One moment the small village of Volkzenewas silent, with Redlynn drifting off to sleep to the rhythmical sounds of her clock ticking, the next a scream pierced the night.

Redlynn leapt from her bed, grabbed her sword, and tore out to the street. People in their nightclothes, brandishing torches and lanterns, filled the village center.

"Where are they?" she called at the nearest neighbor.

"Cantrel's." The woman ran for the safety of her home.

Anya! Redlynn sprinted toward the south edge of the village. Her best friend was on guard alone at the Cantrel's hut. Breathing hard, the cold night wind whipped her wavy, red hair into her face and raised goosebumps on her skin. The sound of her blood pumping in her ears drowned out the buzz of the village folk.

Redlynn charged through the crowd gathered outside the hut. "Move," she yelled. The other members of the Sisterhood and villagers backed away at the sight of her.

The smell of blood hit her. She stepped over the threshold, the horror slapping her with force. Her heart faltered and a cry escaped her lips.

Anya's mangled body lay sprawled on the floor, her bow still clutched in her fingers. Redlynn's mind numbed, unable to process the scene. She spun slowly on the spot. An arrow stuck in the wall next to the door. Bits of wood were strewn about from the smashed kitchen table. Coals tumbled from the fire, and little more than charred cinders remained of the curtains. A pail of water lay discarded nearby. The Cantrel's huddled on their bed in the adjoining room, Mrs. Cantrel sobbed into her husband's chest.

Anger and despair ripped through Redlynn's gut. Her sword hit the floor with a clatter and she collapsed to her knees gathering her best friend's bloody body in her arms. She sucked in large gasps of air, tears streaming down her cheeks. The very last of my loved ones.

Anya stared blankly into the night, her eyes transfixed and cloudy. Redlynn stroked her hair and tried in vain to piece the skin together on Anya's neck and torso. At just nineteen, Anya had been through so much in her short life; too much, and now it was over. Sadness gave way to anger and bile scorched her throat.

"This is your fault," Mrs. Cantrel screeched pointing at Redlynn. "Where were you? You were supposed to stand guard with Anya."

"Find her? Those beasts have probably already torn her to bits. You're the protector and where were you? Asleep. To let my Sasha be taken and poor Anya to be murdered. If you can’t even do the one thing we've kept you around for, what good are you?"

The words slapped Redlynn in the face. Her throat went dry. She searched for something to say. Something to soothe the mother, to soothe herself. "I'll find her."

"Get out of my house, Cursed!" Mrs. Cantrel screamed.

Redlynn's heart thundered in her chest. She laid Anya down, grabbed her sword and pushed out the door, past the crowd of Sisters and villagers. Running flat out she made for the village gate.

Adrian reveled in the feel of Redlynn in his arms. It felt so natural for her to be there. It had been too long since he'd felt the touch of a woman. She looked up at him and licked her lips. Adrian's heartbeat quickened. He told himself that he needed to get her into her own room. But his body didn't move.

"Your heart is racing," she murmured.

He couldn’t speak. Her sweet breath fell lightly on his skin, cooling it.

"Why did you save me in the woods?"

Because you are the most beautiful woman I have ever seen, and probably the one I am meant to take as a mate. "Because you were hurt."

Adrian's eyebrows drew together. "Does that matter?"

"Most people would have left me for dead."

Anger soured his thoughts. Is that what had become of the Sisterhood? Were all males outside of Wolvenglen so callous? How could someone not stop and help a female in need? "Well, I'm not most people."

"No. You're not," she slurred. Her gaze shifted to his lips. She touched his cheek and then ran her fingers through his long hair. "Your hair's soft."

Adrian didn't dare breathe. A flesh and blood woman with golden eyes, and the mark of the wolf was in his arms. It went against everything he'd promised himself he wouldn't do. All the other females he'd said no to. All the years spent burying any desire to find a mate and settle down. All the times he told himself he wouldn't end up like his father. Bending his head, he breathed her in. She lifted her chin. Their lips were inches apart and he tasted her breath in his mouth.

He plunged down and closed the distance between them. The moan that escaped her was enough to send his wolf howling for more. Tangling his hand in her hair he guided her mouth to his more fully. Her lips parted and their tongues mingled in a soft swirl. His mind went numb. Adrian pressed closer to her and her arm twitched. He pulled away quickly.

"Are you alright?" He searched her face for signs of distress.

Dammit! He shouldn’t be doing this. It wasn't fair to lead her on. Especially with her medicated. "You should rest." He laid her on the pillow.

Me too. "It's fine. I can stay somewhere else."

Adrian swallowed. It had gone too far. She wanted him to stay. Part of him wanted to say yes.

Rebekah R. Ganiere is an award winning author and member of the Romance Writers of America, her local LARA and OCC Chapters, as well as the VP of Communications for the Fantasy, Futuristic & Paranormal Chapter. Rebekah is a moderator for the SCV Writers Group and on Savvy Authors. Her debut novel Dead Awakenings hit Amazon's Top 100 list in its genre right out of the gate and has received top review pick on several sites.

Rebekah's love for stories began as a child with Shel Silverstein. She began writing her own poetry and short stories in junior high and high school and then went on to study theater in college. Ultimately she ended up going back to writing so she could stay at home with her kids. Rebekah is a member of Romance Writers of America as well as member of the board for her Fantasy, Futuristic, & Paranormal and local Los Angeles Chapters. She is also a member of the Orange County, and Young Adult RWA Chapters.

When she isn't spending time telling the stories of the characters constantly chattering inside her head, you can find her hanging out with her husband, four children and menagerie of pets. A dog, a rabbit, 2 bearded dragons, 1 Russian Tortoise and 2 Leopard Tortoises. The escaped snake has yet to be located.

a Rafflecopter giveaway
Posted by Unknown at 5:13 AM