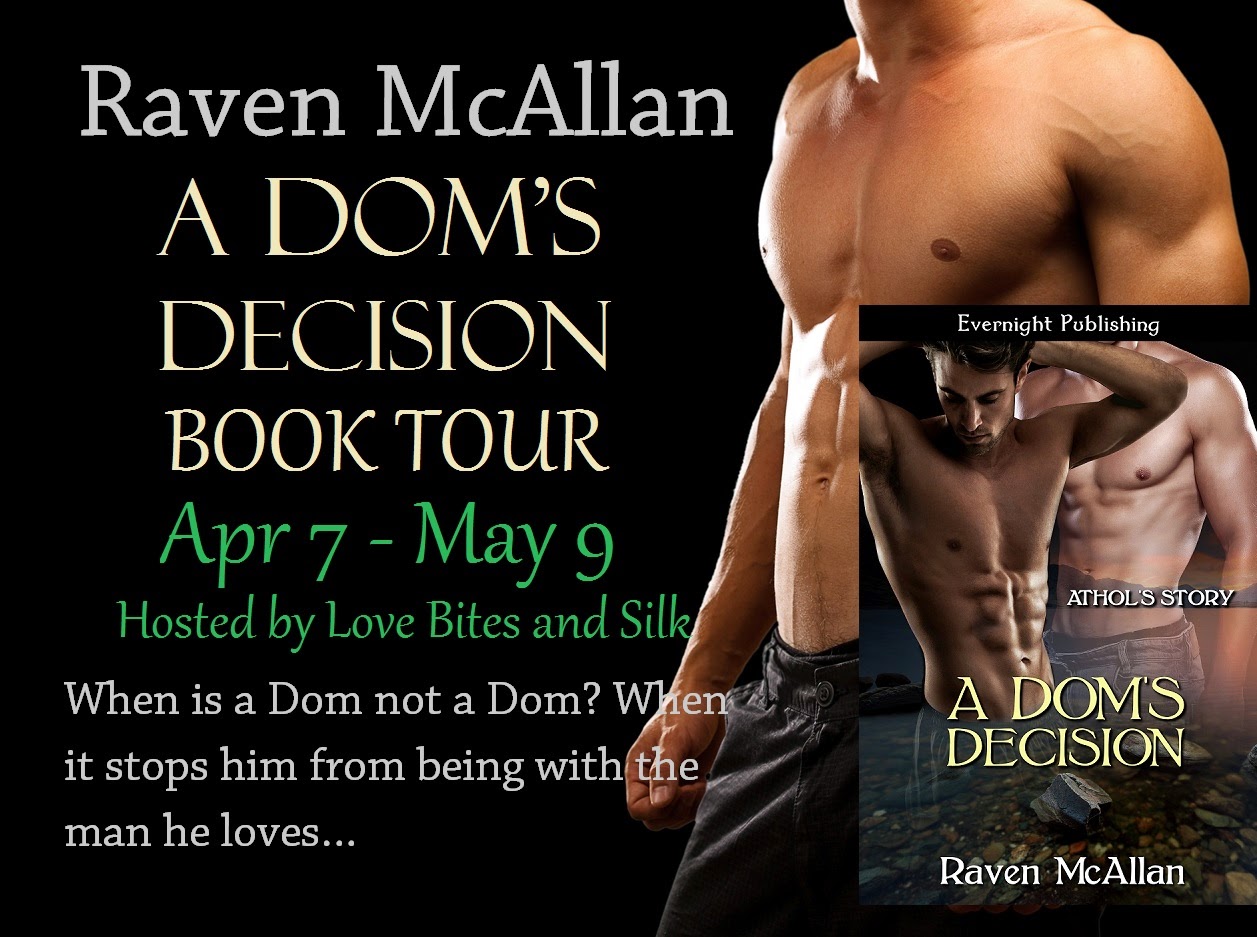 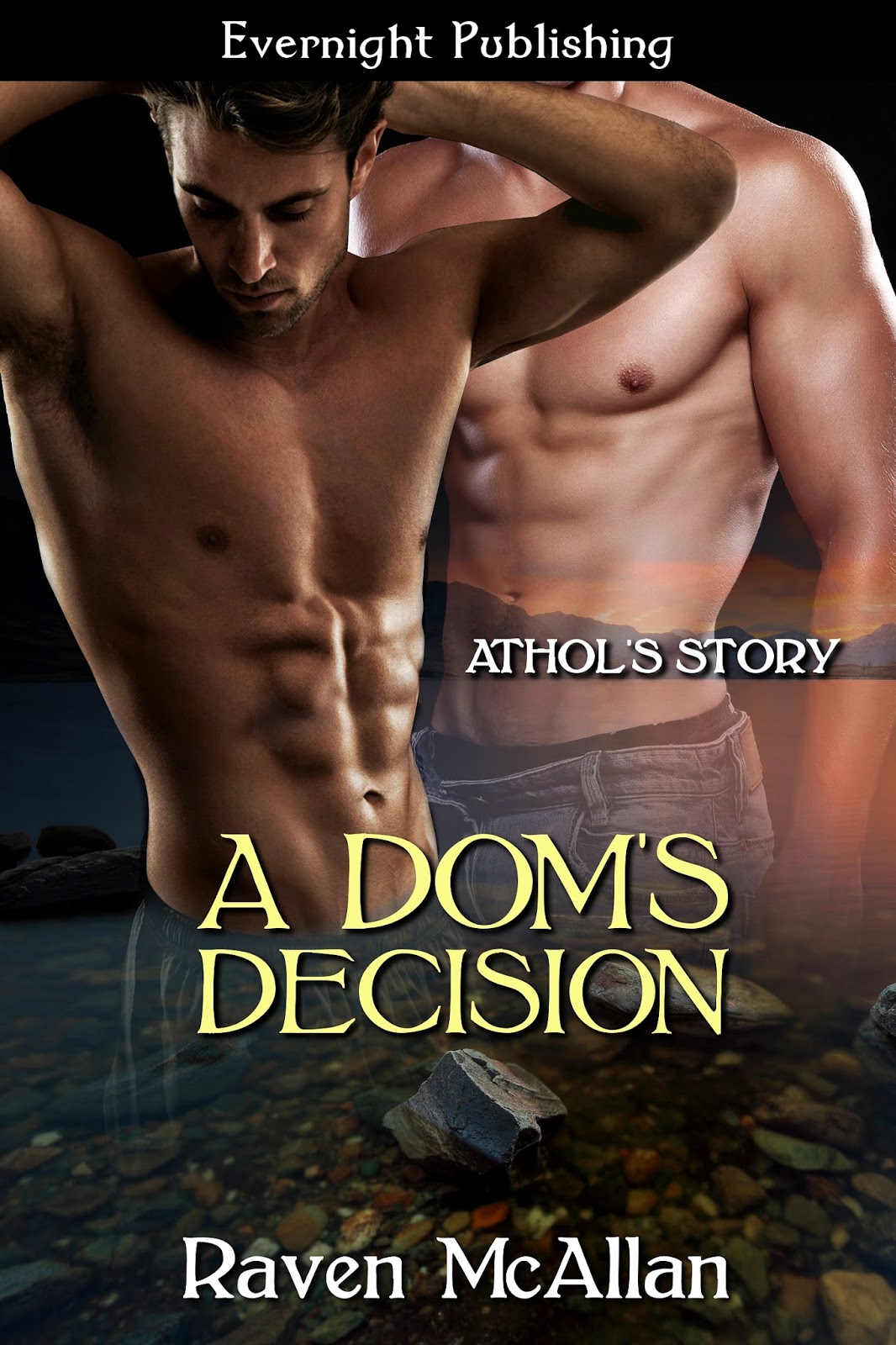 When is a Dom not a Dom? When it stops him from being with the man he loves…

Athol Donaldson lost many people in his life, his lover, his family, his twin. The latter loss seems hardly worth morning over. Affric caused nothing but trouble when alive, and now, he seems intent on causing trouble from beyond the grave.

It forces Athol to seek out the one man he's never forgotten.
Eden Murdoch has no intention of letting Athol slip through his fingers again. He's lost him once, and as they're forced to pull together to unravel the mystery surrounding the parentage of a teenage girl, their love for each other blossoms.

Surely, being Doms doesn't mean they can't compromise? Will they be able to work out their differences, and find lasting happiness, or will this blast from the past prove to be their final undoing?

Athol couldn't believe the rush of adrenalin that coursed through him. Every nerve end tingled. To know they just might be getting somewhere was so exhilarating, that one swipe of Edan's tongue anywhere on his body would make him come. Slight exaggeration, but not much. He swallowed and cleared his throat.
"Well we could do, but then seeing as I came up with the idea, do you want to go first?"
"Fuck first—talk later?" Edan smiled. "Sounds good. So strip. Stretch out on the bed and let's explore again."
That was jumping in with a vengeance. Was revisiting your first lover like riding a bicycle? Once done never forgotten? He'd soon find out.
Athol decided it felt strange to have Edan watching him as he undid his zipper and stroked it carefully down the sensitive skin of his prick. Edan's gaze was so intense, Athol's hands shook, as he held the metal away from his body. Foreskin in zip teeth wasn't a good omen.
"You going to reciprocate?" Athol asked as he inched his jeans and boxers over his cock. The head glistened with pre cum, and Edan's indrawn breath, told him more than words that the sight excited both of them.
"Who's the, ah fuck it, lets just both ask and receive, eh?" Edan toed off his shoes and undid his belt buckle in a hurry. "Last one naked loses the next decision."
Athol laughed as his shoes caught in his jeans as he tried to remove the clothes and not the footwear. It wasn’t possible, so with a quick check of where Edan stood, he grinned and pushed Edan. Edan whooped and fell onto the bed with his denims around his ankles. He waved his legs in the air.
"Cheat."
"Yeah." Athol jumped and landed on the bed next to Edan. He rolled over and grabbed Edan to hold him close, and thrust his tongue in between Edan's parted lips.
This kiss was different. As Edan's male, musky, scent surrounded him Athol knew tears were close. He'd missed this man as if a limb had been severed. His man his other half, was finally here with him.
But for how long? Athol pushed the thought away and concentrated on using his tongue to touch the inside of Edan's lips, and then stroke over the roof of Edan's mouth.
Edan responded in an equally aggressive manner. His teeth grazed Athol's tongue and his lips sucked the flesh. Athol scrabbled for the waistband of Edan's half removed denims and shoved for all his worth, to get them away from Edan's body. In the back of his mind, he noticed Edan performed the same act with his, Athol's, jeans. How they managed without unlocking their lips Athol had no idea, and didn't care. All he desired was Edan naked and next to him.
Edan moved back, and the tiny few inches felt like the Grand Canyon with a force-eight gale to Athol.
"Shit, Ede, I need to feel you somehow. Make your mind up, for fuck's sake. What's going to happen next?" With a tremendous effort, Athol managed to shuck his shoes and jeans, thankful for the urge he'd had to go commando that morning.
"Bratty Dom." Edan gasped the words as his fingers fumbled with the hem of Athol's T-shirt. "Fuck, what's this stuck on?" He held Athol's T-shirt away from his torso.
"Hold on." Athol inched the material up and over his nipples. Edan's moan sent his cock into overdrive and his heart thudding. "Ah, you like?"
"Oh, I like." Edan ran his finger over the silver ring through Athol's right nipple. "How long have you had this?" He dipped his head and Athol about exploded as Edan circled the ring with his tongue and then tugged gently on it.
"Sh … er god, three, four, ah fuck, enough already. Let's do more. Condoms?"
"Con … Fuck, shit, and bollocks." Edan rolled onto his back and groaned.  His dick stood up long, hard and slicked with his pre-cum. "No, I've been celibate for so long they'd have shriveled up. You?"
Athol echoed the groan, and laughed softly. What he really wanted to do was cry and rail. Talk about serendipity—not. Was this his punishment for what happened all those years ago? Why on earth would he have thought he'd need rubbers? He'd been more concerned he might need a box to protect himself from a kick or a punch. "Don't talk daft. I'd forgotten what one looks like. Shit. Ah, well. Sixty-nine always was my favorite number. We're clean, and I trust you."
"And back." Edan shuffled round until his head nestled so close to Athol's cock Athol could feel his breath as it fanned over his heated skin. Athol grabbed Edan's ass and pulled him closer so he could put his lips on Edan's prick and give tiny little kisses along the length until he laved the head. With a mental sigh of pleasure, Athol pulled Edan's cock into his mouth and swirled his tongue over it. He enjoyed the salty taste, inhaled the musky male scent, and reveled in the moans and sighs Edan made.
A tug on his own cock sent his heat beat racing, and his skin pricked with arousal. He closed his eyes to let himself sink deeper into those beautiful sensations. It was nigh on impossible to groan with pleasure with a mouth full of wet cock, but Athol knew his shudder of pleasure reverberated into Edan. He nuzzled his head further into Edan's groin and grasped his ass even tighter. Edan reciprocated and together they began the nips and sucks of loving each other.
It wouldn't last long. He wouldn't last long. Athol had no illusions that he wouldn't be able to stave his climax off. Nor did he want to. The climbing emotion, the increasing heat, the shuddering, juddering emotions, and taut skin, embraced him, and he let them flow through him.

Raven lives in Scotland, along with her husband and their two cats—their children having flown the nest—surrounded by beautiful scenery, which inspires a lot of the settings in her books.

She is used to sharing her life with the occasional deer, red squirrel, and lost tourist, to say nothing of the scourge of Scotland—the midge.

Her very understanding, and long-suffering DH, is used to his questions unanswered, the dust bunnies greeting him as he walks through the door, and rescuing burned offerings from the Aga. (And passing her a glass of wine as she types furiously.)

Review
I was given this book by author for honest review. Athol and Edan brought back together after many years. Back and forth decision of who's in charge makes for some lively banter. Some hot scenes some so-so ones. Good book with entertaining characters.