Synopsis
Welcome to The Indigo Lounge, the scandalously sexy sky-high playground where anything can happen...
Flirty, dirty and utterly delicious, HIGH is the perfect next read for lovers of the internationally renowned This Man series from Jodi Ellen Malpas & Sylvia Day's Crossfire series. Zachary Savage is a man accustomed to getting whatever and whoever he wants. He's buried his demons and risen from the ashes to become the playboy owner of the internationally renowned Indigo Lounge, a fleet of ultra-exclusive sky-high pleasure palaces. He has everything he wants, until he sets eyes on Bethany Green. One look is all it takes ~ she has to be his. Bethany Green has endured the worst year of her life; bad luck and heartbreak at every turn. Karma swings wildly in her favour when a money-can't-buy golden ticket lands in her lap - an invitation to experience the scandalously sexy Indigo Lounge for herself. Green by name and green by nature, is she brave enough to accept the hottest ticket in town? One glimpse of Zachary Savage is enough to convince her that she isn't cosmopolitan enough to play in his glamorous, sinfully sexy world. But they're already in the air, and reality is a long way behind them. The only way is up. The Indigo Lounge. Step aboard and check your inhibitions at the door.

Amazon US | Barnes & Noble
Review
I was given this book by author for honest review. Indigo Lounge a sky high club for the rich, famous, and one insecure winner is about to commence. Hot steamy and mind blowing are the words that come when reading about Bethany’s experiences with Zachary. Can’t hardly wait to continue this in Higher.
Excerpt 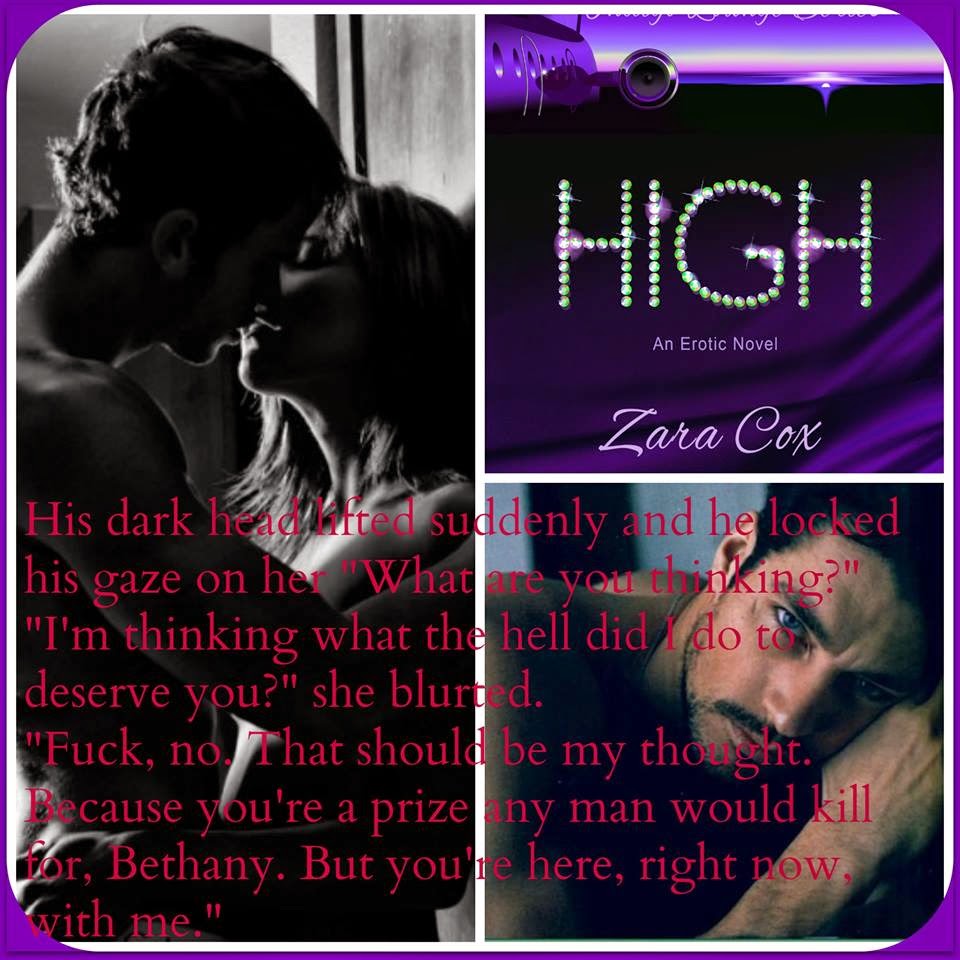 Zachary Savage looked up from the papers he was perusing and watched three men enter the Executive Guest Suite.
From his position behind the glass wall of the mezzanine floor office he’d commandeered from his assistant, he tracked them with narrow-eyed attention.
The lead member of the rock band Friday’s Child was immediately recognizable. Back in what felt like another life, Zachary had attended a couple of their gigs. But that was before everything had gone to hell.
As usual, any thoughts of how his life had changed over the past six years made his jaw clench with anger and sorrow.
If he’d known that his stopover would clash with one of his Indigo Lounge flights, he’d have made other arrangements, placed himself very far away from harsh reminders of the past.
What the hell; he was here now.
He tried to get his brain back to work mode. So far he’d gone through the info on all the passengers boarding his plane except one.
That he normally did the vetting from the comfort of his San Francisco home office was neither here nor there. The stopover from London to refuel his jet was taking longer than expected. Working while he waited helped contain that restlessness that continued to prowl inside him.
As far as he’d been able to determine, the band members were clean. No evidence of drug use or excessive drinking. The other six parties travelling on this Indigo Lounge experience had been equally vetted. He tracked the band members to the front desk, watched them flirt with the receptionist.
His boredom escalating, his gaze returned to his papers. There was only one unknown quantity. He glanced down at the papers.
Bethany Green. The wild card.
Her invitation had been issued late, but so far the preliminary background check was clean.
He was about to flip over to the photograph page when a flash of yellow caught his attention.
She stood framed in the doorway of his building, two large weekenders clutched in her hand and an oversized purse slung over one shoulder.
Long, dark hair spilled in rich waves around her bare shoulders and over her arms. Against the sunlit backdrop, Zach couldn’t immediately see her face but what he saw of her body made his breath catch as something flickered awake inside him.
The way she held herself, slightly unsure but poised on the threshold as if talking herself into taking the next step, intrigued him. In his world, women reveled in being ball-breakers, strove to show no weakness in his presence in hopes of impressing him.
Seeing one who recognized her vulnerability and was struggling to own it was oddly captivating. He stood and walked to the window, surprised by how much he wanted to see this woman.
The wind caught and flattened her short dress against long, sexy bare legs, legs that seemed to go on forever before they curved to embrace rounded hips and a firm, flat stomach.
Zach’s cock jerked, stunning the hell out of him with a hunger his jaded existence hadn’t allowed him in a very long time. When his gaze reached her breasts, he let out a growl and realized his fingers were braced against the glass, his head almost touching it as he strained to see her face.
But she remained in shadow, poised on the threshold of the building, undecided whether to step in or bolt.
Come in.


Connect with the Author