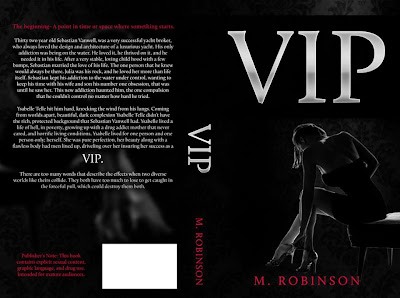 The beginning- A point in time or space where something starts.

32 year old Sebastian Vanwell, was a very successful yacht broker, who always loved the design and architecture of a luxurious yacht. His only addiction was being on the water. He loved it, he thrived on it, and he needed it in his life. After a very stable, loving child hood with a few bumps, Sebastian married the love of his life. The one person that he knew would always be there. Julia was his rock, and he loved her more than life itself. Sebastian kept his addiction to the water under control, wanting to keep his time with his wife and son his number one obsession, that was until he saw her. This new addiction haunted him, the one compulsion that he couldn’t control no matter how hard he tried.

Ysabelle Telle hit him hard, knocking the wind from his lungs. Coming from worlds apart, beautiful, dark complexion Ysabelle Telle didn’t have the rich, protected background that Sebastian Vanwell had. Ysabelle lived a life of hell, in poverty, growing up with a drug addict mother that never cared, and horrific living conditions. Ysabelle lived for one person and one person only; herself. She was pure perfection, her beauty along with a flawless body had men lined up, driveling over her insuring her success as a VIP.

There are too many words that describe the effects when two diverse worlds like theirs collide. They both have too much to lose to get caught in the forceful pull, which could destroy them both. 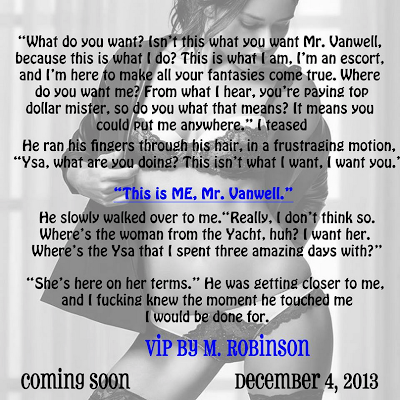 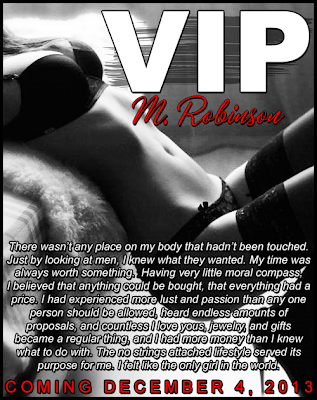 M. Robinson loves to read. She favors anything that has angst, romance, triangles, cheating, love, and of course sex! She has been reading since the Babysitters Club and R.L. Stein.

She was born in New Jersey but was raised in Tampa Fl. She is currently pursuing her Ph.D in psychology, with two years left.

She is married to an amazing man who she loves to pieces. They have two German Shepherd mixes and a Tabby cat.

Her debut novel VIP will be released in December 2013. Add it to your TBR list!!