Synopsis
All families have secrets, and Jules Stone’s is no exception. Deciding not to follow in her family's Oscar-winning footsteps, Jules chooses to take a more behind-the-scenes career in one of the Top 10 Talent Agencies in Chicago. After being dumped five hours before spending Christmas with her dysfunctional family, she needs a plan to avoid their judgmental eyes.
Enter: Kayden Reece.
Kayden is the black sheep of his family, being the one actor drowning in a world of doctors and lawyers. Never really getting a jumpstart at his acting career or landing a big time role, he can feel his dad’s disappointment soaking into his spirit.
When Kayden gets a chance to meet and sign with a big name agent at Walter and Jacks Talent Agency, he’s ready to prove everyone wrong. Jules stumbles into the building in shambles, ugly crying, and begging to pay an actor a big sum of money to be her made-up boyfriend for five days, Kayden jumps at the opportunity—finally able to say he landed a role.
When secrets start to unravel, Kayden and Jules must learn that all families have their baggage, sometimes co-stars fall in lust, and it’s important to always have invisible mistletoe hanging around.
This holiday season join the two fake lovebirds as they partake in the role of a lifetime.
♥♥♥♥♥♥♥♥♥♥♥♥♥♥♥♥♥♥♥♥♥♥
Buy Now 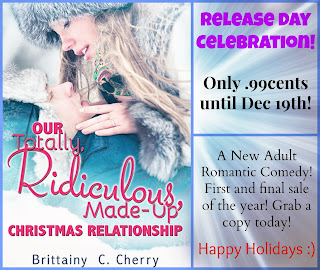 
♥♥♥♥♥♥♥♥♥♥♥♥♥♥♥♥♥♥♥♥♥♥
Teaser
“Oh my gosh, Jules, I’m so glad you’re here! We are swamped! First, fast question, do my feet look swollen?” Stacey, my co-worker, steps out of her slip-on shoes and shows me her fat toes. Ew. She sure knows how to make pregnancy look appealing. “Gross, right? Anyway, please say you’ll stay and help me with these auditions.” “No Stace! I was just stopping by to pick up a few things. I have a five-hour drive with Richard starting in less than an hour to go watch my sister tongue the ex-love of my life. I can’t help this time,” I cry at my begging co-worker as I walk into the agency to see a room filled with hopeful male actors who are auditioning for the new Fresh toothpaste commercial. “P.S. I’m still pissed at you for ignoring the picture of Richard I sent you last night. He looked super hot.” Stacey’s eyebrows arch. “You didn’t send me a picture.” “Right. Lie about it. Whatever, I gotta get going.” “No! Please, Jules! We are hours behind, Grace went home with food poisoning, Claire is knee-deep in audition applications, and I’m eight-and-a-half months pregnant, hungry as fuck, and annoyed as hell.” Stacey wobbles into my office—well, my boss’s office, which I am using until his vacation is over—with her large puppy-dog eyes staring me down. No lie, Stacey makes a super cute preggers woman, but her begging isn’t going to help. I still have to pack! Plus there’s supposed to be this crazy blizzard moving in. “Sorry, babes.” Shrugging my shoulders, I reach into my pocket, pull out the engagement ring, and exclaim, “Richard has a big weekend planned for us!” Expecting an excited response in return from my friend, my high-pitched pronouncement is met instead with a silent stare at the ring box. “What is that?” She asks, narrowing her eyes. “Where’s the diamond? And why are you even considering marrying him? Everyone knows you’re only taking him up to your family’s cabin to show Danny that you’re over him. Which in turn makes it quite obvious that you are not over Danny.” A huff falls from me and I pull the ring away from her viewpoint. “You’re a mean pregnant woman. Did you know that? Anyway, I’m leaving now, and the next time you see me, I will be back as a fiancée! Happy holidays!” Picking up my paperwork, I turn away from my rude co-worker, and head out of the room, still staring at the diamond ring. It’s gorgeous! It’s pretty. It’s nice. Sigh…it’s decent. Walking through the agency in my own world, I envision my future wedding—the colors, the flowers, the look of shock on my family’s faces, Danny’s nonexistent body because he’s not invited—and I am shaken from my daydream when my body slams against a wall…a moving wall, with abs? My eyes look up to an outrageously handsome man standing in front of me, who I almost plowed over. My papers go flying everywhere, and the engagement ring lands across the room, yet I have to force myself to break contact with his green eyes, which are firmly locked with mine. I shake my head back and forth, repeating Richard’s name in my mind. Richard, Richard! I’m engaged to Richard! “Oh no!” I overreact, looking at my papers and the soon-to-be-on-my-finger ring resting on the carpeted floor. The handsome guy helps me, apologizing for not paying attention; but, now I’m a little worried about my ring that went flying. That’s a five thousand dollar ring! Okay, maybe one thousand. Five hundred? Hell, okay I saw the same one for two hundred and fifty dollars at Walmart during Black Friday, whatever. Bending down to pick up the ring, handsome guy beats me to it; and I am lost in the moment as he’s down on one knee, holding the ring up to me. My mind melts, forcing me to lose all my common sense. “I do!” I scream. His brows raise, and my hands fly over my lips, “I mean I do need to get going with that.” Awkward laughter starts now, but I don’t know if it’s coming from him or me. When he hands it to me, he smiles this stunning grin; he must definitely be an actor auditioning for the toothpaste commercial. “Congratulations on your engagement.” “Oh, I’m not engaged, yet. But he did this really cute thing this morning; it’s a pretty darn adorable story actually...” I laugh, and the stranger stares at me with a blank expression, waiting for me to share. “Okay, well, I woke up, and found out that he left the ring under my bed for me to discover.” A short laugh escapes his almost closed lips, “You mean he dropped it under your bed?” “Ugh! What is it with people and all of these stupid technicalities?” I mutter, snatching the ring from his hands. His smile grows bigger, and I would almost hate his smugness if his eyes weren’t all sultry and dreamy. “Well, good luck with that.” He turns away to walk back over to the lobby and my hands land on my hips. “I don’t need your luck! I am getting engaged! It’s a done deal pretty much. So screw you, and the old people, and my mother, and my sister, and Danny, and all of your stupid technicalities which have nothing to do with me and my soon-to-be husband!” I shout. When everyone in the room pauses and stares at me as if I grew another head, I know it’s time to leave.

Goodreads / Facebook / Website
Brittainy C. Cherry has been madly in love with words since the day she took her first breath--okay maybe not THAT long, but pretty darn close! She lives in Wisconsin with her loved ones and she adores a great romance. Her debut novel, The Space in Between, released August 9th, 2013 and she has many more stories in the works! Other hobbies she loves include: screenwriting, acting, dancing (poorly of course!). Coffee, chai tea, and wine are three staples that she believes everyone should invest in! It's also a known fact that whenever Brittainy is trying to write there is a fur baby or two begging for hugs and kisses--which she gives the spoiled animals of course!