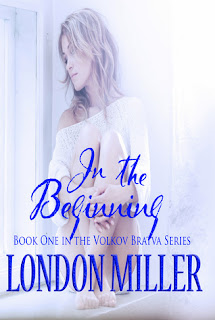 Twenty-year-old Lauren Thompson left her small town in Michigan to begin a new life in the Big Apple where no one knows her name or the tragedy that had rocked her family fifteen years prior. With new friends and an intriguing new love interest, starting over is easier than she expected...but Mishca Volkov isn't what he seems. As the son of a Russian Mob boss, he thrives in a world of chaos and fear, earning the title of Bratva Captain through blood and pain.

When the two cross paths, lines blur and passions ignite, bringing them closer than they could ever imagine. Until secrets from the past threaten to tear them apart. Can they fight past their demons...or were they doomed by fate before they ever met.

I was given this book by author for honest review. Lauren is an innocent trying to make a go of it in the big city when she meets mob son Mishca. She sets out to find all she can about her but can she handle and deal with the truth when it’s brought into the light. Mobs, murder, and mayhem abound. Loved all the characters and can’t wait for more in the next book.

I'm not all that interesting, just to be honest, but I try to create interesting characters. My debut novel, In the Beginning, was released in October and the sequel, Until the End, will be released early Spring 2014.

In all honesty, he was gorgeous, like take your breath away and just stare for a while, gorgeous. Yet, there was something a bit dangerous about him that Lauren couldn’t put her finger on. It seemed like his presence was magnetic, and she felt compelled to be near him.

“I would hope to think you like what you see.”

Lauren snapped out of her thoughts, blinking rapidly as she realized she had just been standing there, staring at him…again. Clearing her throat, she tried for a smile, extending her hand. “I’m Lauren.”

A corner of his mouth tipped up as he pocketed his phone. He took her hand in his much larger one, his hold gentle as he swept his thumb across her knuckles.

For a moment, it felt like they were the only ones in the café as she stared up at him, captivated by the sheer curiosity she saw in his eyes. Was this what it was like? That instant attraction? She had never felt breathless before, had never felt more than a casual interest in a boy, but right now, standing in front of him, blood rushing to her face, this was definitely more than a casual interest.

“Mishca Volkov,” he answered softly, like it was only meant for her to hear.

It was nearly twenty years ago when Mishca met Dr. Cameron Thompson for the first time. He had been his and Alex’s private physician. He had never made the connection between Lauren and the doc, mainly because had never known where the man was from, or any other aspect of his life. Whenever they called, the doctor just showed up, no questions asked.

“Does she know of us?” Mikhail asked.

This was what this meeting was about, not about Mishca’s personal life. Mikhail didn’t care who Mishca was with, but if it compromised their business, then it became a problem.

“I don’t think so. She would have been what…five when her father was murdered, yes? I doubt he would have announced his side job. Besides, any connection we had with him was buried as soon as he went in the ground.”

Mikhail dropped his napkin n the table, withdrawing a number of bills from his pocket. “Talk to her. Find out. I am allowing you to handle this situation on your own since this is your territory after all. Do not make me regret it. You know the consequences.”

Mishca nodded, stuffing all of the photos and documents back into the envelope, placing it in the inside pocket of his jacket.

“Was his murder our doing?” Mishca asked looking back at his father.

Clapping Mishca on the shoulder, giving him a small smile, Mikhail and his men left.

No two men were the same when they faced possible execution. Some begged and pleaded, trying to bargain their way out of it, promising obscene amounts of money or anything their executioner could want. Others stood—or kneeled in this instance—already accepting their fate, but there was still that fear in their eyes, and even some regret. These two? They cared more for one another and Mishca would use that.

“Give my regards to Declan.”

Shifting his aim by a couple of inches, he shot the younger brother in the shoulder, the momentum of the bullet throwing him backwards. He hit the ground hard, groaning in agony behind the gag, but at least he was alive.

Blondie groaned in protest, lurching to get to him, but Vlad held fast, holding him steady. The younger brother’s shirt was already darkening with blood, the saturation quickly growing by the second.

“Don’t worry,” Mishca said conversationally as he wiped the gun clean of any prints with the tail end of his shirt. “Your brother will live, but he needs to see a doctor.”

Grabbing his hand, he placed the gun in Blondie’s hand, wrapping his fingers around it. He didn’t seem to understand at first, staring first at the gun like it was foreign to him, then up at Mishca.

Vlad backed off, allowing his captive to rush to his brother’s aid. He apologized over and over again, draping the younger boy’s arm around his shoulders as he hauled him up and out of the alley without a backwards glance.

“How did you know he wouldn’t shoot you, Captain?” John asked as he holstered his own weapon, looking to Mishca with a calculating stare.

“His younger brother meant more to him than impressing Declan.” Mishca looked around, then over his clothes. “Clean up any evidence.”

With that brusque order, Mishca left his men in the alley, returning to the club, making his way over to the bar, ordering a vodka for himself and a club soda with lime for Lauren.

Mishca found her in their corner, chatting with Amber over the pounding bass of the music. When she saw him ,she lit up, tucking her hair behind her ear, and he couldn’t help but return her welcoming smile. She knew nothing about what he had just done, there wasn’t any evidence on him—even still, these clothes would be burned—and he didn’t want her to. He didn’t want to see any other expression on her face when she saw him besides the sweet smile that always greeted him.

“What took you so long?” She asked when he was close enough to hear her over the music.

He handed her the glass, taking a sip of his own. “Long line.”

After a while, Lauren felt guilty. Since her father had died when she was five, if there hadn’t been a new suspect in the following eleven years, there wasn’t much see for Ross to do. He continued to work tirelessly, though, all hours of the night, wanting to give her answers because he felt like she deserved them. She had finally asked him to stop when he began spending more time in the precinct looking over the files instead of enjoying his off days at home.

“I was only five at the time and don’t remember much of anything.” She stared down at a button down the front of his shirt. She didn’t remember the night or the time before it.

“And that is why you feel this...guilt, because you don’t remember your father.”

When he said the words that had plagued her over the years, she nodded. “I wish I could.” And no matter how hard she tried to bring that night to the forefront of her mind, it slipped farther away.

Mishca shifted so they were now facing each other. “What do you remember about him?”

She looked back at the picture, smiling wistfully. “I remember he loved me more than anything in the world.”

“Then that is all that matters,” he told her gently.


At the end of the night, Lauren walked Mishca out, pulling the door up behind them so they could talk privately. He had his hands tucked into his front pockets, an easy smile on his lips.

She shrugged a shoulder. “I liked you.”

She hesitated, not ready for him to leave yet. “Same time and place as always?”

He seemed to notice her reluctance, taking a step closer to her. She met his eyes, saw the curiosity in them and it was enough to make her do something she had thought about for days.

Going up onto the tips of her toes, she kissed him. When he gave no reaction, she pulled away.

She took a step back, feeling the blush in her cheeks, not sure what else to do after doing something so bold, but he didn’t let her get far, tugging her back by the front of her shirt until they were flush against each other. Cupping her cheek, he tilted her face up until they were just a whisper apart.

She wanted to think that because she initiated the kiss, he would have known that she wasn’t going to back out of it now, but he still hesitated, giving her the chance to back away before he kissed her. First, he pressed his lips to hers gently, then pulled away like she had done, but in the next moment, he was coaxing her lips to part, twining his tongue with hers.

Lauren fisted her hands in his shirt, just above his waist, holding him against her, but she couldn’t seem to get close enough as she arched against him. He returned the sentiment, one hand sifting through the heavy fall of her hair, gripping the strands. His other arm went around her waist, his hand at the small of her back.

Neither of them cared that they were in the hallway of her apartment building, open for all to see. Lauren sighed, the sound lost in his urgent kisses, the way he expertly took control of the kiss, the way they fit together and moved like they had done this thousands of times before.

She was too caught up in the moment to notice Miss. Carter, her elderly next door neighbor as she appeared at the top of the stairs. She cleared her throat dramatically, looking at them disapprovingly as she shuffled to her apartment, shaking her head.