Snow the Vampire Slayer
by Rebekah R. Ganiere
Farielle #2
Publication Date: September 22, 2014
Genres: Fantasy, Romance
Synopsis: After deposed vampire prince Sage helps King Adrian and the werewolves drive the vampires out of Wolvenglen Forest, he comes face to face with his worst fear. A beautiful woman who makes him lust to break his vow, and crave her blood.

Lady Snow Gwyn is tired of staying at home to take care of her seven brothers, instead of being out with them at night, hunting for bloodsuckers. Ever since a mysterious witch bestowed the mantel of the Vampire Slayer upon her brother, Snow has wanted nothing more than to be out there fighting along side her brothers, but it isn't her place.

And when Snow meets Sage, she's torn between the need to kill him for what she believes him to be, and the desire to give in to the feeling that he stirs within her. But Sage is more afraid than ever that his uncle Philos, King of the vampires, will find out about Snow and once and for all, stomp out any chance Sage has at true happiness.

Sage must enlist the aid of Snow's brothers to help him regain his rightful place as King of the Vampires and finally exact revenge on his uncle. If only he can keep them from killing him first.

Snow smelled like fruit, and springtime, and life. So much life. Sage savored the lingering taste of her blood.


Lifting his finger, he traced the line of her elegant throat. His fangs begged for her taste. He could take her. Drop her to the ground and drink her dry. She wouldn't be willing, but what did it matter? How many women had he terrorized by feeding off them?


Too many. He came to his senses and withdrew his fingers from her throat..


"You're-- You're a vampire, aren't you?" Her voice was barely audible.


Her eyes sucked him in and refused to let go. Sage's brain fogged at her scent. She reached up and placed her fingers on his cheek. His chest squeezed and his eyes closed at the sensation. Happiness washed over him and his vision flooded with images of them in his bed, her body intertwined with his.


"You can't be. Your skin is cool, but not icy." She dropped her hand to his chest. "And your heart beats. But much slower than it should."


Sage retreated. "You need to leave. Run home. It isn't safe for you out here!"


"No danger has ever found its way to my glade. Not even bears live here."


She had no idea how many hundreds of women he'd killed when they thought they were safe. "Well, danger has found you now, so you need to go." Sage retreated further. He should leave. Return to his underground hovel and forget he'd ever seen her.


"Go!" Sage shouted, moving to her so quickly she blinked twice, startled.


Bloodlust slammed his body. He turned from her as his fangs burst into his mouth. A strange sensation overcame him. He didn't want her to see him, not like this. He shouldn’t have played with her, toyed with her. He should have run from her scent instead of showing himself.

Rebekah is an award winning author. Her novel Dead Awakenings, debuted in January 2014. Red the Were Hunter, the first in her Farielle Series, released in May and the second book Snow The Vampire Slayer will be releasing in September 2014. And her trilogy The Society will be released in 2015 by Kensington's Lyrical Press. Rebekah is the VP of Communications of the RWA FFP Chapter as well as a member of her local Los Angeles and Orange County chapters. In her spare time when she isn't writing you can find her moderating on SavvyAuthors.com or hanging out with her husband, four children and her English Bulldog, rabbit, two bearded dragons, and three tortoises. The escaped snake has yet to be found.
Website • Twitter • Facebook • Goodreads 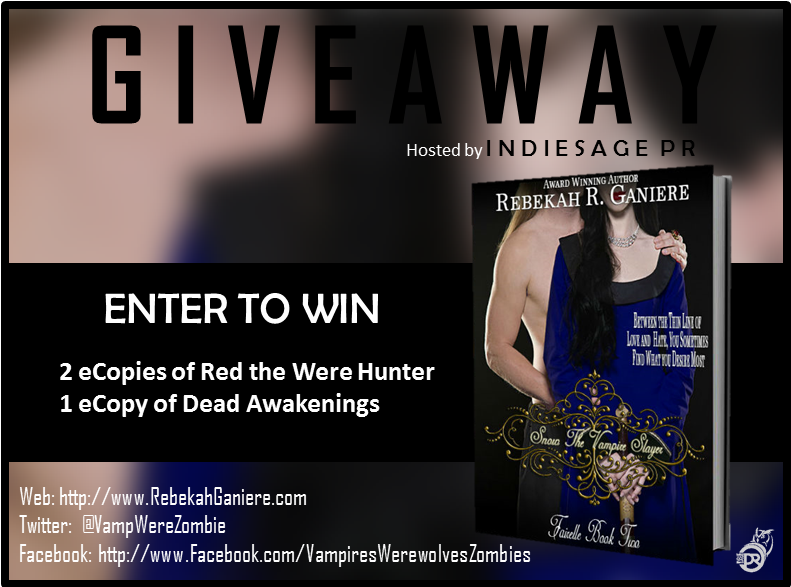