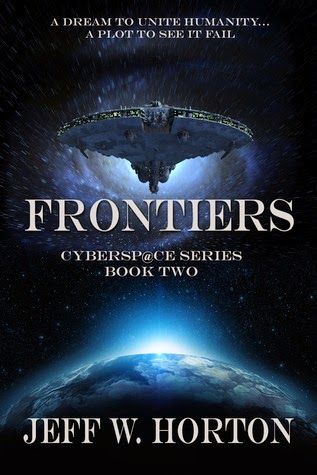 
Scientists discover the technology to successfully construct Earth's first interstellar spacecraft, code named Frontier. Hank Reynolds, a gifted and courageous test pilot for the United States Air Force, is assigned to test pilot humanity's first interstellar spacecraft on a historic flight to Alpha Centauri. Under the command of the fledgling Earth Space Alliance the spacecraft will carry human beings to the stars, and beyond.


Someone doesn't want to see this happen and will stop at nothing to see it fail--including murder... When Frontier is sabotaged, Hank is left stranded and alone to die in the Alpha Centauri system. With their dreams crumbling around them, will they be able to discover who is behind the plot to steal the alien technology, and to murder those closest to it?

I was given book for honest review. Super intelligent Hank has a hard time growing up. But grown up and being a pilot he has the opportunity to fly in a spacecraft modeled after alien technology. Not everyone wants to reach the stars so he has to deal with assassination attempts and sabotage. All the while trying to get a date with the girl of his dreams. I enjoyed this book because some of it is so believable and deals with real issues that are happening and concerns right now. "My name is Jeff W. Horton, and I am a novelist. I say I am a novelist and not an author because an author can be someone that writes about anything including novels, historical biographies, travel guides, etc., while a novelist is an artist, a painter if you will. Imagination is the paint and the keyboard the paintbrush."

Jeff Horton is an author of Christian Fiction, writing within several different genres, including science-fiction, fantasy, and apocalyptic thrillers.