Synopsis
Hatred. Desire. Broken Dreams. Jules McAllister has loved and lost. She experienced the gut wrenching pain of grief after her boyfriend, Scratch, a member of the Nordic Lords MC, died on the same night that she told him they were going to have a child. Grief stricken and destroyed, she left Jasper Bay, unable to tell anyone the truth of what really happened that fateful night. When her childhood friend, Olivia needs her, Jules realizes it’s time to return home and give her daughter what she wants most – a family. But Jules didn’t count on the tumultuous emotions she would feel around Scratch’s brooding and angry brother, Jaden. Jaden has vowed to never forgive Jules for, what he feels is her role his brother’s death. Being face to face with Jules again, who is now a mother to a young child, he finds that his anger hasn’t waned and swears to have nothing to do with mom or child. But how can he reconcile the burning fury in his soul with the irrational urge to touch her? To taste her? To own her completely? Can wounded hearts that still bleed ever be healed? And can two people broken by their pasts find freedom from their pain in each other? Or will a night of passion destroy them both? 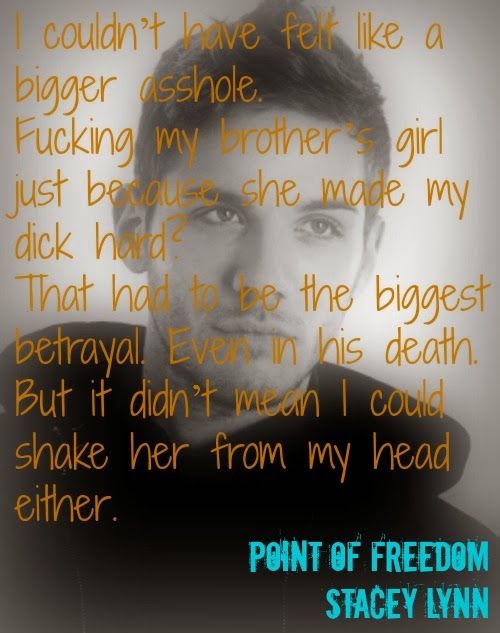 Teaser
Drool pooled at the edges of my mouth as I stared at him in the early morning daylight. So early that I could tell through the cheap, dusty blinds that the sun was just starting to come up. The small glimpse of light was enough for me to know that he might look like Scratch… But he didn’t. He was hard and defined and rough and angry in a way that was uniquely him. I licked my lips, tried to turn around and search for my damn shoes. I had to get out of there. Quickly. But when I did, my hip bumped his table and I let out a quiet curse, biting my lip to keep from swearing louder. “Your shoes are in the truck.” Crap. I’d woken the beast.


Point of Freedom (Nordic Lords MC, #3)
Amazon US | Amazon UK
Review
I was given book for honest review. Jaden has the hots for his brothers ex-girlfriend. Jules has gone through a lot in the past few years. Trying to take care of her daughter and move on from the past she comes home. Experiencing a mother’s nightmare she turns to Jaden and the club for protection and help. Loved Jaden and his no remorse attitude but found Jules a little bit disappointing when she didn’t stand by her man. All together book is another hot one for Stacey Lynn to join the Nordic Lord collection.
About the Author

Amazon Bestselling Author of the Just One Song series, Don't Lie to Me, Remembering Us and the Nordic Lords MC series. I am a wife, a mom, and a writer. I can often be found curled up on the couch with a good book, or obsessively eating Skittles in a very complicated and organized manner. No joke.