Sins of a Bad Boy 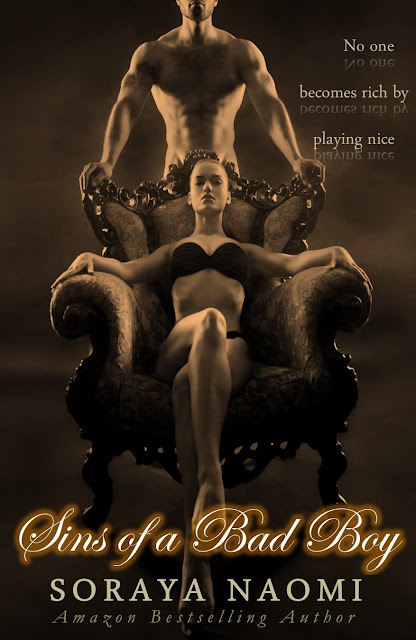 William Kade was a renowned fighter who fought hard and played dirty. He titillated all women and was rejected by none – he was an Original Bad Boy.

An orphan who came from nothing, William became a ruthless businessman who desired to build an empire from a gaming club and an illegal fight club with his best friend and mentor, Charles Lindon.

But when profits declined, Charles and William ventured into a new world and decided to open the first hardcore sex club in the U.S. More money was needed to expand their business; however, when debts of the gambling club weren’t being paid, they were forced to take drastic measures to secure a steady cash flow. Drastic measures that involved Ivy, a woman William already had unfinished business with. A woman that might be the only female that equally annoyed and intrigued him.

When William and Ivy start to play a game, the stakes become higher with each passing day until no one can find a sane way out anymore.

No one feels the depth of your pain, only your own heart.

Book one of The Original Bad Boys series. All books in this series are standalones and can be read in random order. 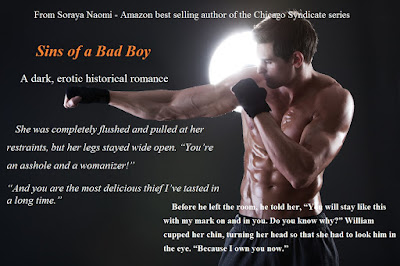 She rolled her eyes. “Mr. Kade, please just leave me alone after this dance. You bore me to no end.”

“Liar,” he said softly with an icy bite. “I don’t bore you, and my dear Ivy, you do the exact opposite to me.” He drew her even closer to him. “Don’t tempt me.” An amused warning was directed at her.

“How am I tempting you?” she threw back with an absolute bothered countenance.

He gave her a dark, jaded smile and didn’t answer her since he didn’t comprehend himself how she was tempting him. William was having a lot of trouble melting this ice princess, and why he’d actually asked her to dance in the first place evaded him right now. She was exasperating; why did she have an aversion to him? It surprised him that he possessed such an infatuation for this perfect stranger.

As he took in her delicate features, he remembered why he’d asked her to dance. She was oblivious to how she shimmered with an innate sensuality. There was something in her sky-blue eyes that betrayed a hidden desire, or fear. He couldn’t quite make out which one, and usually, he could read people easily because Charles had taught William to notice and how to interpret people’s mannerisms. And he still didn’t know her age but guessed she must be eighteen or nineteen.

Finally, when some of the other guests started to watch their closeness, William allowed her to take a small step back, and he ended their dance in uncomfortable silence. He escorted Ivy away from the crowded dance floor as people kept brushing past him and decided he’d had enough of teasing her.

“My lady.” He bowed slightly and winked, detecting a small twitch in her pretty pink lips.

She inclined her chin, and he turned, feeling her gaze burning into his back as he walked away, toward Charles on the other side of the room.

William was unsure how he felt about their odd encounters, and he couldn’t refrain from looking back one more time. Ivy had a full grin on her face, causing William to frown at this weird woman. He shook his head and joined Charles; however, before he could even open his mouth, there was an uproar among a few of the couples who were dancing nearby.

William and Charles scrutinized the commotion.

The musicians kept playing, but a stream of couples moved to the side, and one man’s voice came booming over the music, “Who took it? No one leaves this ballroom! I knew I felt something a few minutes ago!” Said gentleman was checking all his pockets.

As William watched the man, a strange sensation came over him, and he searched for Ivy, who was now holding a tall glass in her hand, staring at him. There was something in the way she was smirking at him that made him check his own inside jacket pocket, and he was completely surprised to find a lightweight wallet in there – one that was not his.

He muttered under his breath, “Are you kidding me?!”

William glared back at Ivy while gritting his teeth; he couldn’t believe she’d just set him up.

“She fucking set me up!”

The crease in Charles’s forehead deepened as he stepped closer to William so no one overheard their words. “What are you talking about?”

“Ivy,” he snarled and touched his breast pocket, “stole the wallet and planted it in my pocket.”

I was born in South America in 1984 and raised in Europe where I presently reside with my fiancé.

I read many genres but favor intense, dark, seductive, and provocative novels where the male character loves fiercely, without remorse or boundaries. I also adore forbidden love tales and have an odd fascination with kidnapping romances. No, I don't secretly want to be kidnapped, though!

I have a passionate obsession with the written word and indulge in chocolate pastries much too often.