Tess has just discovered sex. And now, she’s about to discover sex as a weapon.
The Seattle barista and art student is happy with her beautiful Brit boyfriend, Ben — especially in the bedroom. But while Ben’s her first, she’s hardly his. And Ben’s sexual history seems to be popping up in Tess’s face like something out of a zombie movie, and it has her questioning his commitment — and questioning whether his appealing alpha maleness is just a cover for a controlling personality.
Maybe one that’s meant to keep her from asking too many questions.
Is Ben the problem, or is everybody from his past the problem?
Tess is asking the questions, and pushing hard for answers.
Is Nicole, the ex-fiancé who cheated on Ben, trying to worm her way back into his life? Was there something between Ben and Tess’s best friend, Erin? Or what’s going on with Ben’s adored teenage sister, Caroline, and Ben’s best friend Dan? And how did Ben get Tess a job interview with Mr. Andrews, his sophisticated but slimy boss at the music magazine?
As Tess comes to learn, relationships — especially sexual ones — are as much about power as love. With each new discovery, she finds herself in a struggle to hold her head together as much as her heart.
And to find where her own power lies.

I was given this book by author for honest review. Book 2 of The Private Series. Finds Ben and Tess further involved with relationship now defined. As with any relationship it has strong and low points. Lows being repeated past thrown about. Still has family connections branded about good and bad. Really enjoyed. Wanting next in series.

I smack him. Hard.
He stumbles back in pure shock and I was able to turn his head with my swing. I once again have an audience in a Starbucks. Damn … I better stop this, before I can no longer show my face in another one… He looks back at me and he looks pissed. Oh, shit. He closes his eyes stretches his neck and I can see him push his tongue to the left side of his cheek, making it look like he has a ball in his mouth.
He takes in a deep breath, points at me and says, “You’d better keep quiet, unless you want to hear all about what Ben’s been up to.”
Whew. I thought for a second there he was going to hit me back. Wait, what does he mean about what Ben’s been up to? I take a look around the shop and people quickly turn away. I am so pissed off and my wrist is killing me. I grab my jacket and bag and head out the door myself. 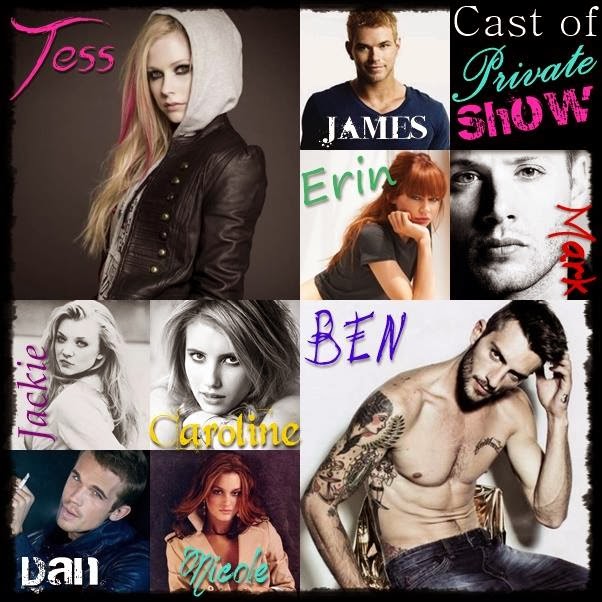 FACEBOOK / WEBSITE / GOODREADS
Hi! I am Danielle live in Western New York with my husband and two sons. I never knew I had a dream to become a writer until I started becoming obsessed with reading in the last two years. The obsession began with Twilight and then matured to Fifty Shades. While used to reading mainstream best sellers, found a new love for indie authors. I love to do paintings related to the books I read and eventually turning into Pushy Girl Paintings and now do work for other indie writers and readers. My first book idea started from a dream I had one night and became obsessed with the story and started writing. Now having arguments with the people in my head and loving every moment of it, even when they take control of the story.

I was given this book by author for honest review. Ben models for Tess’ art class and can’t get her off of his mind. Not to worry she’s just as obsessed. Liked the chat room bar. Thought it was unique idea. Loved the big brother family protection that popped up. Overall very good book and do want to read next in series.

US ONLY
a Rafflecopter giveaway

US AND INTERNATIONAL
a Rafflecopter giveaway