SEAL for Her Protection Release 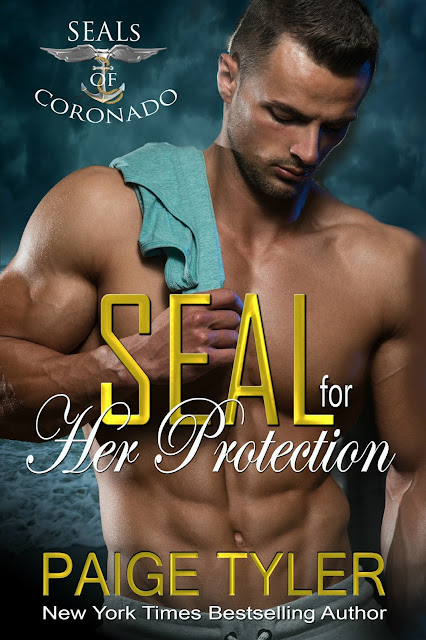 He saved her from the danger once before. Can he save her again, this time from danger he doesn't even see coming?

When investigative journalist Hayley Garner is kidnapped by terrorists, she's sure they're going to kill her. But in sweeps handsome Navy SEAL Chasen Ward to rescue her. After getting her to safety, he disappears into the night before she can even thank him.

Weeks later, while covering a story on the local navy base, Hayley runs into Chasen again. Even though she didn't see his face that night he rescued her, she can't forget his beautiful blue eyes.

The attraction is immediate and intense, and Hayley finds herself falling into a fiery romance with the hunky hero out of her dreams. Guys like this aren’t supposed to really exist, but Chasen does, and damn is he hot.

But ever since she got back home, Hayley has had the feeling someone's been watching her. Is it post-traumatic stress or does she have a reason to be afraid? Good thing she has a Navy SEAL to protect her.

She’d thought he’d be easy to find, but the place was SEAL hunk central, with an awful lot of the fit, attractive guys in attendance. While quite a few of them flashed charming grins in her direction, none of them had those unforgettable blue eyes she’d spent the past four weeks seeing in her dreams.

Her earlier assessment had been right. This was hopeless.

Sighing, Hayley turned to go in search of Brad instead and almost smacked right into the broad, muscular chest of a guy in blue camo. She stared at his uniform up close, absently wondering why the Navy wore blue camouflage. It wasn’t like they were ever going to be in a blue jungle. She glanced at the rank on his collar—noting the three chevrons of a petty officer first class—then the nametag sewn on the right hand side of his chest, noting his name—it said WARD—before lifting her head to apologize for practically mowing him down. But when her gaze met his, all she could do was stare. There couldn’t be two men on the planet with eyes that blue. She’d found the SEAL who’d saved her life.

Okay, that definitely wasn’t the most intelligent thing she’d ever said out loud. But the SEAL smiled anyway, flashing the cutest pair of dimples her way.

Hayley’s breath hitched. She’d tried to picture what he looked like ever since that night, alternating between Chris Hemsworth and Henry Cavill and finally settling on a combination of the two. She hadn’t even been close. Petty Officer Ward was even more gorgeous than she imagined. Taller than she was by nearly a foot, he had broad shoulders, dark hair, and a square jaw to go along with those mesmerizing eyes. Now, this was what a superhero should look like.

She’d been so caught up in the memory of the captivating blue of his eyes she’d completely forgotten how sexy his voice was. The deep, rich tones caressed her, making her feel warm all over. Just like they had that night in Africa. Wow, this guy was pure sexy, wrapped in blue camo. She had a crazy urge to ask him to say something else—anything else—so she could hear that voice again.

She offered him her hand, pulse skipping when he took it. Wow, he had really big hands. A little part of her mind whispered something about the significance of that, but she ignored it. Instead, she focused on the overall sense of strength seeming to pour off him in waves. Being this close to him and getting a chance to take in how tall and muscular he was reminded her of the way he’d picked her up and carried her so effortlessly that night—all while using a weapon.

Hayley had never thought of herself as the kind of woman who wanted to be swept off her feet by a guy, but right now she was thinking this man could carry her anywhere he wanted to.

Damn, this guy was seriously messing with her calm, cool journalist exterior.

Chasen. Unusual, but it fit him. Gorgeous name for a gorgeous guy. She wondered if the guy realized the kind of effect he likely had on every woman on the planet, especially the one standing right in front of him. Probably not, she guessed. Guys were usually clueless about that kind of stuff.

“How did things go over there?” she asked. “After you got me out, I mean.”

She cringed as soon as the words were out. Guess he hadn’t messed with her journalist mojo as much as she’d thought. Crap, now he’d think she was looking for a scoop. Nothing turned people off more than a nosy reporter.

But he merely nodded. The shade from the brim on his hat accentuated his chiseled features as he moved, making them seem even more angular.

“They went well,” he said. “My Team and I got back a few days ago as a matter of fact.”

Her inner Barbara Walters wanted to ask what else they’d done over there, but before she could decide if that was a good idea or not, two other Navy guys in blue camouflage sauntered over. Both petty officers second class, they were tall, well-built, and good looking.

“Hey, I know you,” the younger of the two men said with a trace of a Southern accent. Blond with brown eyes, he had that casual Channing Tatum-thing going on. “Though I hope you don’t mind me saying, you look a lot better now than you did the last time we saw you.”

Hayley frowned in confusion at the two men, sure she would have remembered if she’d met them before.

Chasen chuckled. “This is Dalton Jennings and Nash Cantrell. They were with me when we rescued you that night. You’ll have to forgive Dalton for being clueless. He’s taken several classes on how to be charming, but unfortunately, he keeps failing them.”

She laughed and shook hands with both men. Dalton looked so chagrined, she couldn’t help but take pity on him. “Don’t worry about it, Dalton. I’m well aware of how much of a mess I looked that night. Thanks for being there with Chasen and the rest of your Team.”

The SEAL visibly relaxed, giving her another grin. “No problem. Just doing our job, ma’am.”

Dalton might have failed out of charm school—according to Chasen at least—but there wasn’t a woman alive who wouldn’t swoon over that Southern drawl.

“I know it was hard to tell with all the gear we had on,” Dalton continued. “But I was the one doing this.”

Dark eyes suddenly intense, he struck an action hero pose, arms lifted as if he were holding an imaginary machine gun. On either side of him, Chasen and Nash snorted in unison.

“You mean you were the one nearly running into every wall around you because the batteries in your NVGs were dying.” Nash pointed out drily, his dark eyes filled with amusement.

Dalton considered that a moment, then dropped the pose and shrugged. “That might have been me.”

Hayley laughed, unable to help herself. They were both funny—and seriously cute—but she had to admit she was glad when they took off a little while later, leaving her alone with Chasen.

“How is your ankle feeling?” he asked as his buddies walked off toward the pavilion.

“Much better, thanks,” she said.

He looked down pointedly at her foot where it peeked out from under her long skirt. She’d tried not to make it obvious, but she’d been standing with all her weight on her good foot so she could give the injured one a rest. Chasen lifted a brow as if he saw through the little white lie.

Hayley gave him a sheepish look. “Okay, you caught me. It still hurts a little. But it really is much better. Thanks to you.”

“If you hadn’t gotten there in time, a messed-up ankle would have been the least of my worries. I don’t know how I can ever repay you for saving my life.”

That playful grin returned. “I’m more than ready to call it even if you consider going out to dinner with me.”

If Chasen were any other guy, Hayley might consider making him work a little harder for a date. But she’d been more than ready to go out with him since he’d loaded her on that helicopter over in Africa. Heck, there’d been a time or two when she’d woken up from an especially nice dream involving the Navy SEAL when she was ready to do a lot more than date the guy. Rip off his uniform and roll around on the floor with him being one thing that came to mind.

“Dinner sounds great,” she said, quite proud of her ability to maintain her composure.

“Friday night work for you?”

Hayley entered her number in his phone while he did the same with hers, then she gave him her address.

Touching his fingers to the brim of his hat in a causal salute, Chasen gave her another smile then strode off. Hayley let out a sigh as she watched him go.

Damn, he made that blue camouflage uniform look good.

Paige Tyler is a New York Times and USA Today Bestselling Author of sexy, romantic suspense and paranormal romance. She and her very own military hero (also known as her husband) live on the beautiful Florida coast with their adorable fur baby (also known as their dog). Paige graduated with a degree in education, but decided to pursue her passion and write books about hunky alpha males and the kick-butt heroines who fall in love with them.

She is represented by Bob Mecoy.