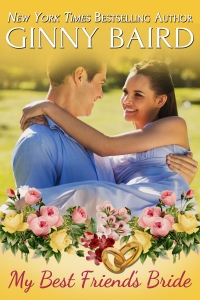 From New York Times Bestselling Author GINNY BAIRD, a new laugh-out-loud romantic comedy...
Relationship expert Jillian Jamison is in a bind. While her first book was a successful bestseller, her second tome tanked. Now, her publisher wants a spin on the third book, Married Love: Keeping Those Home Fires Burning, that's up close and personal. With financial pressures mounting and sole responsibility for her aging grandfather, Jill feels forced into wedlock. But it's only for a year and she's devised a plan with her long-term friend. When Brad backs out, Jill fears she'll be left standing at the altar. Then Brad offers a solution: Jill can marry the one man on earth she despises...his handsome best friend.
Hunter Delany is a confirmed bachelor and that's how he likes it. When his best friend Brad approaches him with an unusual contract, he's determined to run for the hills, especially since the name on the paperwork is international celebrity Jillian Jamison, the woman who spurned him in high school. Hunter would rather do anything than spend twelve months of his life saddled with her. But he has a soft spot for Brad who's in a predicament, so Hunter agrees to consider Brad's proposal. When Hunter learns he's getting passed over for a job promotion, because the client only wants to work with those in a family way, this clinches the deal.
Hunter is "in" for as long as he can stand it. Jill is not thrilled with the arrangement either. But really, what choice does she have? Even if it has to look authentic on the outside, between her and Hunter it's just pretend. Besides, she reasons rationally, she's already got the dress...

Before Jill knew what was happening, he reached for her and clamped her against his chest in a big bear hug. His frame was rock solid and he smelled of musky cologne. Hunter’s arms wound around her securing her at the waist. “Sorry bud,” he whispered to Brad, “the press is watching.”

Jill stared up at him, her mind whirling. “Hunter! Just what are you doing?” She didn’t know why, but her knees felt weak and her mouth went dry. She was probably in a state of shock. It wasn’t like she recalled that old longing she’d held, when she’d hoped to be in Hunter’s arms, so many years ago. Then, she’d imagined him to be a different kind of guy…the sort who could really care for a girl, and sweep her off her feet with one kiss. Not that she’d let him try, especially after learning what sort of guy he really was. The type who was only in it for the moment, and wouldn’t have given her a second thought once she’d completely given him her heart. His dark eyes caught the sunlight as he dipped his chin toward hers.

“Making us public,” he said with a grin. At once, Jill felt transported in time and she was all of seventeen again, helplessly under Hunter’s spell. The next thing she knew, his mouth was on hers, all hot and heavy, his tongue sweeping in to taste hers. Jill sagged in his arms and he tightened his embrace. This was wrong. This is insane… But Jill found herself kissing him back, just a little at first—and then a lot. He felt so good and smelled so fine, she nearly forgot they were standing at the edge of a parking lot. Jill’s temperature spiked as her tennis racket crashed to the ground. Oh man, he was good. Better than good. Hunter’s skill was top-notch. Excellent. Why oh why, had she waited so long? Or perhaps it was good she’d waited, until the fruit of her desire had ripened to perfection. Was it Jill’s imagination, or was Hunter just as ravenous for her? Somehow her arms were around him, her wrists overlapping at the back of his neck. It was almost like she was enjoying this, wanting more of him... What? Hunter? Jill called herself up short and broke away, stepping back with a gasp. At least she hoped she was gasping and not panting. Whoa.

Hunter saucily cocked an eyebrow and spoke with a husky rasp.

“Can I take that to mean you missed me, too?”

Jillian (Jill) Jamison – The heroine from My Best Friend’s Bride, Jill Jamison, is a thirty-year-old relationship expert. She has shoulder-length brown hair and warm brown eyes with hints of honey around the irises. Jill’s first book, Love Like You Mean It, was an international bestseller. Her second tome, Long-term Love: Making It Last, tanked. Now, Jill’s under pressure to produce a third book, Married Love: Keeping Those Home Fires Burning, that’s up close and personal. The trouble is—though she’s experienced at giving others advice—Jill has never had luck in the boyfriend department herself. She has several ex-boyfriends, including Isaac who gave Jill her dog Fifi. Jill also has a Tom cat called Mimi. When hero Hunter hears about Fifi and Mimi, he refuses to live under the same roof with pets having such ridiculous sounding names. This makes Jill steamed, as does everything else Hunter says and does. When he unexpectedly lays a hot kiss on her while seeing her for the first time in twelve years, Jill’s absolutely furious! She’s also angry with herself for reacting so eagerly to Hunter’s advances. He’s the guy she’s hated since high school. Surely, a fake marriage will never fly with a dyed-in-the-wool womanizer like him! Forget that he’s more handsome than ever, and has that lop-sided smile that still makes her weak in the knees. And never mind that her deadline for marrying is only a few weeks away. Jill can’t imagine making things work with the type of cad she warns women about. Not Hunter Delaney! No way!
Hunter Delaney – Hero Hunter Delaney is also thirty and works for an advertising agency. He’s back in town after being away for more than a decade, during which he’s developed his skills on the job and failed at his numerous encounters with women. Hunter has his own reasons for guarding his heart, so emotionally he keeps females at bay. Ultimately, they become frustrated and walk out on him, just like Sabrina did when she almost clobbered him on the head with the three-inch high-heeled shoe she lobbed in his direction. Hunter has dark hair and eyes, a buff frame, and stands over six feet tall. He’s been Brad’s best friend since prep school, and has repeatedly come to Brad’s rescue by getting him out of trouble. This time is no different, except it involves that stuck-up brunette Jill Jamison, who was too good for Hunter in high school and now believes she’s better than the rest of the world. Okay, so Jill’s held up pretty well over the years and still has those pretty brown eyes Hunter mooned over as a teenager. But, deep down, she’s still an “ice princess” with that same chilly heart. At least, that’s what Hunter thinks until Jill’s fiery hello kiss has him believing she’s experienced a deep thaw…
Cassandra Evans – Cassandra Evans has been Jill’s nemesis since high school. For as long as Cassandra’s known Jill, Jill’s been a pain the neck, besting Cassandra again and again at every competition. Cassandra wanted to write novels, but instead she’s stuck working for a gossip magazine. And just look at Jill with her worldwide celebrity! Though Cassandra’s sneakily discovered that little-miss-prissy Jill isn’t always as successful as she claims to be. Cassandra takes pride in being the one who brought Jill’s second book down by publishing her exposé on the “fact behind the fiction” of Jill’s real dating life. Now, suddenly, looky here! Jill’s getting married! Not once, but twice! First, to her childhood friend Brad, which smelled fishy enough. Next, to famed womanizer Hunter Delaney, which stinks to high heaven! If anyone smells a rat, Cassandra does, and she’s extra good at getting to the bottom of things. Thank goodness she’s tall, blond and leggy, and has a way of influencing sources. She’s also got the wardrobe for tackling any undercover operation. A fact that comes in handy when she meets a nerdy—yet increasingly attractive—private investigator engaged in the same mission. 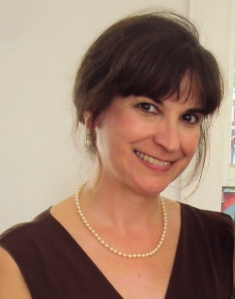 NEW YORK TIMES and USA TODAY Bestselling Author Ginny Baird has published novels in print and online and received screenplay options from Hollywood for her family and romantic comedy scripts. She writes touching, often humorous, contemporary romance about single women facing everyday challenges. Known for featuring holidays and family themes in her work, Ginny frequently portrays the struggles of single parents or others who've given up on finding true love.
Ginny has two novella series, The Holiday Brides Series (holiday romance) and The Summer Grooms Series (summer romance), as well as additional single titles available. She is a NEW YORK TIMES and USA TODAY Bestselling Author, a Top 10 Best Seller on Kindle, NOOK and iBooks, and a #1 Best Seller in several Romance and Women's Fiction categories. Visit Ginny's website www.ginnybairdromance.com to learn more about her and her books.

Five Copies Of The Calendar Brides by Ginny Baird (ebook edition: choice of Mobi or ePub)
a Rafflecopter giveaway
This tour has been hosted & organized by