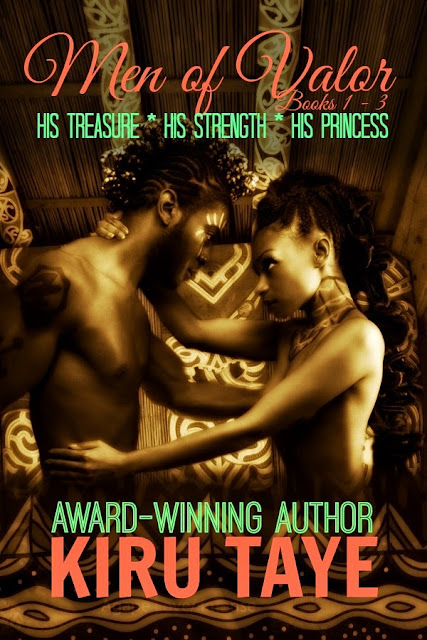 His Treasure
In a time when men ruled their households with firm hands, can a quiet man tame his rebellious wife with persevering love?

Love Romances Café Best Book of 2011
Kiru smolders with the sensitivity of the loved in describing this man... An exceptional book, well worth the time, money and frustration.....Sigh! ~ Imagervet (Amazon reviewer)

I didn't want the story to end, it was that good. ~ The Wordsmythe (Amazon reviewer)

***
His Strength
When a warrior seeks to claim a free-spirited woman, he soon discovers a tigress unwilling to be caged. Is the hunter about to be hunted?

The story is well told, the characters are tight and multi dimensional. ~ PamelaStitch.com

I enjoyed the FIERY passion between Ikem and Nneka...their chemistry is totally OFF-THE-CHARTS...and only IGNITED more by their INTENSE and sometimes humorous verbal sparring. ~ Malaika Tamu (Amazon reviewer)

***
His Princess
With the weight of a kingdom on his shoulders and his honour at stake, can a Prince truly love a slave?

I loved the hero, who in a land and time of male dominance, chose to be a man without reproach - a man worth losing one's heart to.  ~ Empi Baryeh, author

This book was fantastic. Throughout it I kept wondering how the hero and heroine would end up together. When the major revelation came I said, "Hot holy crap" out loud because I didn't see it coming. ~ Nana Prah, author 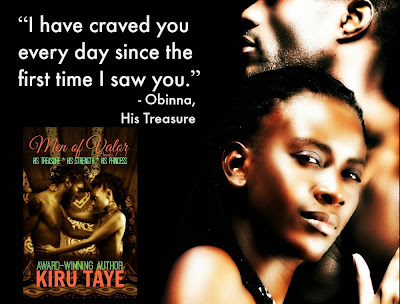 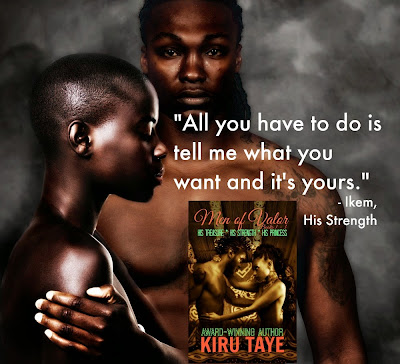 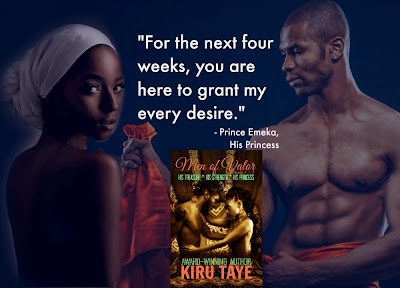 Excerpt from His Treasure
Obinna looked up at her, his eyes fringed by long, dark lashes, a black, expressionless pool she could drown in, always unnerved her. As she couldn’t read his mood, gauging how to tell him what she wanted to say was difficult.
“Yes, say what’s on your mind Adaku,” he said in his usual deep voice, as he licked his long fingers.
Something stirred low within her belly. Her eyes hungrily followed his action, and she got distracted. For a brief moment she wished it was her fingers he was licking.
“That could be arranged.”
Adaku looked up sharply and Obinna’s brow was lifted with amusement. She realized she must have spoken her thought out loud. Embarrassment and heat washed over her as he took hold of her hand in his large one.
Somewhere within her mind something shifted. An awareness of Obinna at a primal level registered in her rapidly hazing brain.
The air suddenly felt warmer and her skin prickled. He took her fingers into his warm mouth in turn, twirling his moist tongue around each. Sensation flooded her body, and she forgot everything else she wanted to say. All she could feel was the stroke of his tongue on her fingers as he sucked and lapped each one.
His touch scorched her straight to her soul.
She gasped and his gaze came up, locking on to her and pinning her to the spot. His eyes were filled with a desire she couldn’t explain. His tongue moved down her skin, searing a path to the spot at the center of her palm before licking it. Then he released her hand, and she realized she was trembling.

Excerpt from His Strength
"Why did you not come to see me when you want me so?" He cocked his eyebrow cynically.
Her mouth formed an O. "I-I don't want you," she replied in a petulant fashion, shaking her head vigorously. But her eyes told him another story. They were a warm brown and stared at his lips as if expecting him to kiss her.
Maybe I should oblige her.
He chuckled. "Liar," he whispered before he lowered his lips to her. But he didn't claim her lips immediately. Instead he feathered her face and neck with kisses, alternating between nipping and licking her sweet-salty skin. Her breathing increased rapidly. When he looked up, he noticed that her eyes were closed. He licked the pulse at her neck before he trailed his lips back up and hovered above her lips. She opened her eyes and moaned softly.
"Say it, Nneka. You want me to kiss you."
"Never!" Her voice, as well as her body, trembled as she spoke.
"Why do you have a tough time admitting what you want? Your eyes and body betray you easily." He laughed as he pushed his thigh between her legs, parting them. He felt the heat and dampness of her hooded pearl against his bare skin.

Excerpt from His Princess
"Rise, Ezinne," he said.
The intense timbre of his words resonated, doing odd things to her insides. She’d heard him speak before. Still, being alone with him seemed to heighten the effect of his voice on her body.
She straightened but kept her eyes lowered. She needed to gain back control of her body. If she kept her eyes lowered, away from him, she could keep her body in check.
"Look at me," he said in a snappy and low… dangerously low tone.
Was he annoyed?
Slowly she lifted her chin, her stare connecting with his once more. His lips were pursed, confirming her suspicions of his irritation.
Anxiety and excitement caused her heart to thump against her chest. Instinct told her to look away. This was the prince. He was capable of crushing her with a snap of his fingers. She should heed the warning.
Instead, she refused to look away and held his gaze. Infuriation crept up her spine at a snail's pace. She would not be intimidated.
"When you are in my presence, you will look at me directly," he continued.
"As you wish, my prince." She nodded and curtsied briefly still maintaining his gaze.
"And when we are in private like right now, you will use my given name, Emeka."
Doing that would mean accepting this whole arrangement as his con—companion. She couldn't do that. She wouldn't do that.
"No, my prince. Regardless of where we are, you are still the Crown Prince of Umunri, and I'm just a servant in your palace. I can't address you by your given name. It is improper."
"That may be so. But for the next four weeks, you are here to grant my every desire as my concubine." 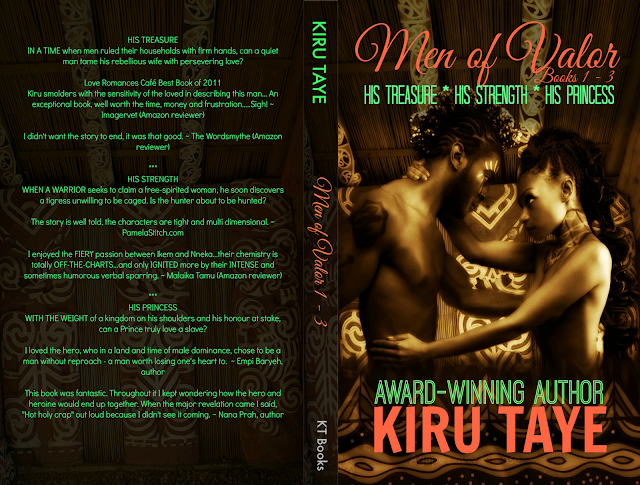 Kiru is the award winning author of His Treasure and bestselling author of The Essien Trilogy series. She writes sensual and passionate multicultural romance stories set mostly in Africa. When she's not writing you can find her either immersed in a good book or catching up with friends and family. She currently lives in the South of England with her very own alpha husband and three children.

Follow her blog for latest news and giveaways: http://kirutayewrites.blogspot.com
Read book excerpts and free short stories on her website: http://www.kirutaye.com
Check out her author page on Amazon http://www.amazon.com/Kiru-Taye/e/B00723TSDI/