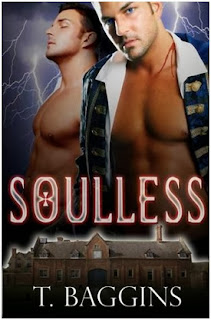 
A Man of Science

Nicholas Robinson is a chemist decades ahead of his time. Crippled by a riding accident and embittered by his injuries, he shuns the world, focusing on his laboratory and experiments. But when the sale of his country estate, Grantley, leads to an encounter with a vampire, Nicholas realizes there is more in heaven and earth than he ever dreamed possible.

A Creature of Darkness

Although three hundred years old, Bancroft Ulwin is young by supernatural standards. Enslaved by his cruel, deformed maker, Ban is forbidden from relations with mortal men unless it ends in death. But his liaison with Nicholas, expressly against his master’s wishes, soon expands beyond mere lust to something more.

Long ago while still mortal, Ban met Serafino, the only true love of his life. When death separated them, Ban accepted his role as an enemy of human kind. But as he comes to suspect Nicholas is Serafino reincarnated, Ban begins to question everything he once believed. Including his own damnation.

“Tell me.” Ban tried not to sound angry. “I have heard Dr. Flowers and his nephew, one Mr. Lark, visited Grantley yesterday as well as today. Why? Do they make you some counteroffer for the property?”


“Of course not. At first they professed to inquire only after my health, and thank me for the bonfire.” Nicholas sounded uncomfortable. “But soon it became obvious they wished to discuss the murder of Mrs. Catherine Turner. It seems there were irregularities uncovered in the manner of her death.”


“Certain details the sheriff missed. For one thing, the poor woman’s throat was cut, yet her mattress and shift were only stained. There should have been great gouts of blood. A bucket’s worth, scattered here and there, was far too little. Yet all the rest was gone.”


Nicholas sighed. “Her stolen possessions. Bits of crockery, some needlework, a few tools. A boy dragging the Maiden for fish retrieved it all, tied in a sack and cast away. The putative thief, it seems, had no use for any such loot.”


“Ban. Forgive me. Dr. Flowers maintains some distance, as does Stephen Lark. We three are less than true confidants. Yet I could not fail to suspect they know what you are. At the very least, they know your kind dwells here in Maidenstone.” Nicholas paused. “Did you… did you kill the baker’s widow?”


“No, of course not. I only wish to warn you, if you value secrecy, it may be compromised. I may even have played a role.”


Nicholas drew in a deep breath. “After our first meeting. When Grand-Mamma intervened, and I drove you off with fire. The next day, I called upon Dr. Flowers to ask him about blood drinkers. He told me about the vampires of Serbia.  He was mystified by my interest, since I never cared for what I previously called fairy tales. I fear he already knew of your kind, perhaps from his extensive travels, and my questions seemed rather too apt.”


The orchard seemed to rotate a quarter turn around Ban, who took hold of Nicholas’s shoulder to steady himself. “Damn you.”


“I told them nothing more! Of course, I confess some division of loyalties. I understand your survival instinct is as powerful as any human’s, yet I—”


“You don’t hold the power of life and death over me! I owe you no gratitude!”


“I only meant… after the way you’ve held me,” Nicholas said haltingly. “Kissed me. I feel close to you. I feel—”


“I’ve fucked thousands of men!” Ban’s backhand knocked the lantern out of Nicholas’s grasp. It struck the ground still intact, spilling light sure to assist the eyes of the spying Brethren, but in that moment, Ban was too enraged to care. “You mean nothing to me! Less than nothing!”


Seizing Nicholas’s cane, Ban snapped it over his knee, slapping the mortal so hard, his upper lip burst.

I was given this book by author for honest review. Not your average mainstream vampire story T. Baggins  gives the life history of Bancroft Ulwin upon his meeting of Nicholas Robinson in the late 1700’s. Nicholas was in an accident and left disabled but recovers much of what he lost after Ban shows remorse. Along with some unexpected twists toward the end make this an unusual read.


Orphaned at birth, T. Baggins was raised by wolves until age fourteen, when the pack moved on one night without a forwarding address. Returning to human society, Ms. Baggins taught herself to read and write by studying fan fiction. Cutting her teeth on Kirk/Spock (Star Trek: The Original Series, baby!) she soon began slashing rock stars and X-Men. Despite a lifetime spent in the southern U.S., T. Baggins considers herself a citizen of the cosmos and a freethinker, which is good, because no one has offered so much as a penny for her thoughts. In her spare time she enjoys blogging at Shades of Gay, emptying gin bottles and tweeting into the void as @therealtbaggins.
Author Links


All prizes open internationally
a Rafflecopter giveaway
Posted by Unknown at 8:00 AM