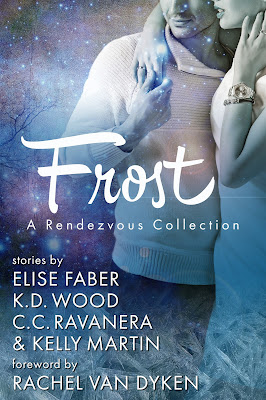 Dive into this fun, sexy, paranormal romance anthology.  A magical hotel and characters that crossover make these four standalone stories that take place in New Orleans around the holidays a don’t miss!

Fire and Ice by Elise Faber

Ten years ago, one mistake decimated Steph’s life. In the decade since, she has worked her ass off to scrape together some semblance of a happy life.
Now, the man responsible for the devastation has suddenly returned to Steph’s life and is demanding that she return home.
Dom may be tall, dark, and ridiculously sexy, but he’s also annoying and pushy, and Steph isn’t thrilled to be taking any of his orders, even when a group of Dalshie –- read: really bad guys who do all sorts of evil magic – show up to try to kidnap her.
Still, Steph doesn’t let anyone else fight her battles, not even when it’s easier to, and not even when the man who makes her heart pound and her soul spark to life is the one who wants to fight them for her.
She and Dom have to find a way to put aside the past and work together, but will the fiery attraction between them burn out before they have can have a shot a future?

When Chief Warrant Officer, Brock Stephens, promised his fiancée, Captain Keely Green, until death us do part, he never expected death to collect on that promise so soon.
Every year they get only one night together in the haunted Hotel Toujours, deep in the French Quarter, where they spent their wedding night.
Despite an especially hard year while on deployment in Iraq, Keely wouldn’t miss this year’s anniversary date for anything. If everything goes as planned, she’ll have one chance to redo their forever. This time around, Keely’s not taking any crap from death.
No matter how high the price.

The Things We Leave Behind by Kelly Martin

Five years ago, Will Jenkins’ wife was killed in a car accident on the way to the Hotel Toujours.
Three weeks ago, a hunter by the name of Jodi Granger shows up on Will’s doorstep talking about vengeful spirits and ‘moving on’.
Will’s wife is haunting room 614 at the infamous hotel… not just haunting… she’s become a vengeful, violent spirit.
Jodi needs Will’s help to guide the spirit into the afterlife because if it stays, it will become more and more violent and can destroy them all.
When it comes to death, it’s the things we leave behind, the things we need to say, that keep us here. Can Will help his wife find peace and at the same time, find his own? 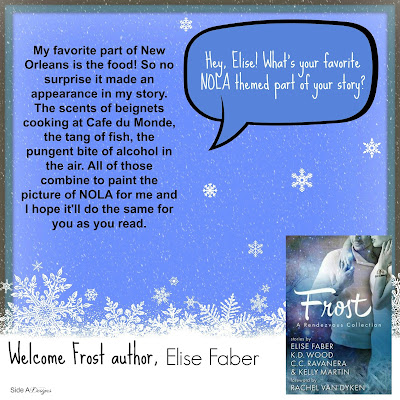 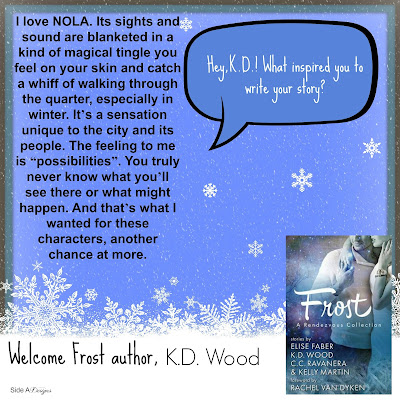 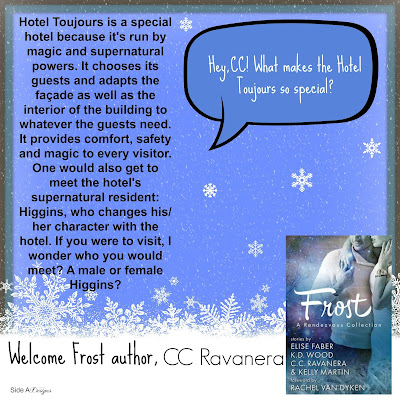 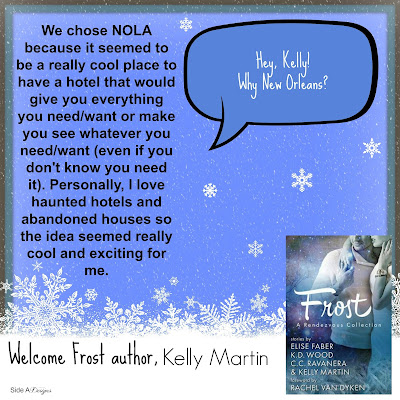 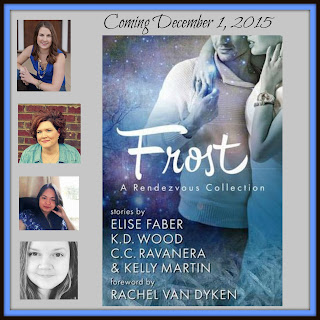 Elise Faber
When she’s not writing best-selling dark and sexy paranormal romances, Elise is often found on the ice rink where she and her husband hold regular hockey date nights. She is the mom to two exuberant boys and addicted to Dancing With the Stars. The beaches, mountains and redwood forests of Northern California serve as inspiration for her books.
Facebook | Twitter | Website | Amazon | Goodreads | Wattpad | Tumblr | Pinterest |Instagram

K.D. Wood
K.D. Wood lives in north Mississippi with her family and a very spoiled White Waug. She creates love stories and smokin’ southern erotica, but not your mama’s happy ever after. She’s a consumer of chocolate but not spiders and is completely composed of liquid awesome. When not in her office pounding the keys she can be found under a snuggly blanket, cup of Donut Shop close by, with her nose in a book.
Facebook | Twitter | Blog | Goodreads | Pinterest | Wattpad | Spotify | Amazon |Authorgraph

C.C. Ravanera
C.C. hailed from the Philippines but now lives in England with her husband and two young boys. She works as a full-time nurse and absolutely enjoys it. When she’s not working she spends the rest of her time running around the house with the boys and spending quality time with her husband. In her spare time (whew!) she writes her books and dreams of becoming a ‘proper author’.

She’s addicted to coffee and chocolates. She loves reading books and waking up to the sound of birds early in the morning.
Facebook | Twitter | Goodreads | Wattpad | Blog | Amazon
Kelly Martin
Kelly Martin is a bestselling author of contemporary, historical, and YA romance. She has been married for over ten years and has three rowdy, angelic daughters. When she’s not writing, she loves watching horror gamers on YouTube– even though she’s a huge wimp– and drinking white chocolate mochas– decaf which totally defeats the point. She’s a total fangirl, loves the 80s and 90s, and has a sad addiction to a certain British boy band (shhhh). Her favorite characters are the ‘bad guys’– especially those who, in their mind, are the heroes of the story.