What Lies Beneath Release 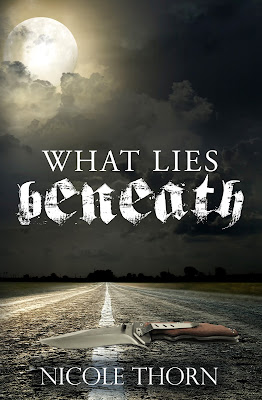 Mila Moody just turned eighteen, and her idea of a celebration is heading to Vegas with her big brother and guardian, Jaxon, to con some suckers out of their cash. She and her brother have lived on the road for their entire lives. Conning people happened to be his preferred method. Get in, get the money, and get out.
Mila picked the wrong man to steal from, and the consequences were made clear almost instantaneously. The man turned out to be a demon who likes to make his money collecting demons with rare abilities and selling them to the highest bidder. The man, Knox, decided to pay Mila back by having her brother stolen from her. Left with no one, Mila has to figure out how to find her brother and get him back alive. What she finds out rather quick is that Knox has an enemy on his tail. A vampire named Landon who’s looking for revenge and the little black book that Mila stole. The two strike a deal that would benefit them both, and Landon agrees to help her find Jaxon before it’s too late.

My words came out quickly. “What if he sees us? What if he calls people to come and kill us? Or tells someone to kill my brother. We can’t let him see our faces! Quick, do something!”
Landon looked like he was about to say something, but he never got the chance. I got on his lap, straddling him. He looked at me, trying to figure out what I was doing. Again, I cut that off quickly. I tilted his head up and laid my lips over his. For whatever reason, he went with it, gently working his lips against mine.
My eyes were open and on the man we were stalking. He was still standing there, but he turned and started moving over to his car. I watched him click the key fob and with a flash of lights the car unlocked.
My focus was pulled when I felt Landon slide his hands up my thighs and to my ass, where he decided to keep them. Then his tongue was in my mouth, and I couldn’t remember what we were doing here. How we’d gotten into this position. My hands found his shoulders, and I held on as if I would drown if I didn’t. My eyes closed.

He slowly dragged his tongue along mine. I either moaned or whimpered, I couldn’t tell. He was hardly moving, but it was enough to make me feel like I was going to die. Was he doing this to torture me?

Nicole “Cappie” Thorn was born in California but, after a stint in Kansas, moved to a suburb of Phoenix. She spends a lot of her free time knitting and reading from her massive book collection. Her eclectic tastes, like Disneyland, Buffy and all things London, carry into her writing. She started writing in her early twenties and finds it wonderfully addictive.
Facebook | Twitter | Website