L is for Luminous Release 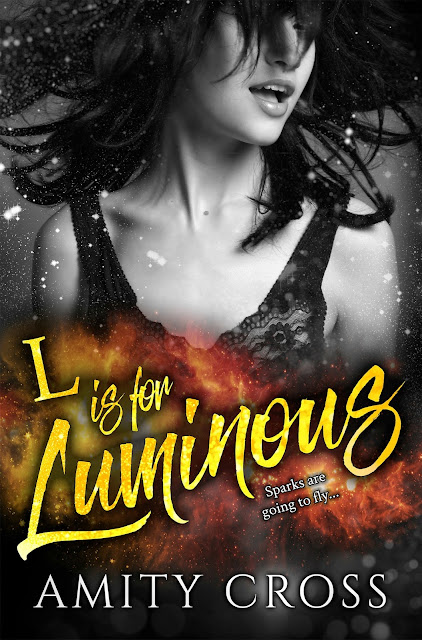 When desperado dork Lux Dawson gets stuck in an elevator at a comic convention, she couldn't be any more mortified.

She's just another writer trying to get her work seen, not to get stuck in a three by four metal box with the sexiest male specimen she's ever seen... who just happens to be guest of honor, Jude Atwood.

Jude's the star of the hottest TV series on the American airwaves, the supernatural detective show Naturals, and he's at the height of his star studded career. Too bad she's a nobody and he has a famous actor girlfriend, who just happens to be his onscreen, epic love. Who could compete with that, right? But for some insane reason Jude wants to know all about Lux...including her disaster of a writing career.

Once those elevator doors are pried open by the jaws of life and reality arrives in the form of hordes of waiting paparazzi, Lux's life is about to explode...

She just doesn't know it yet. 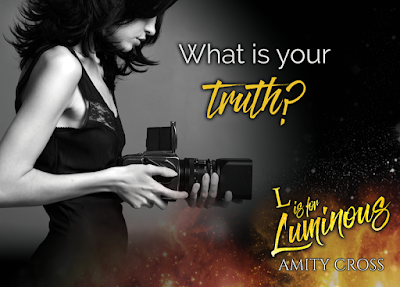 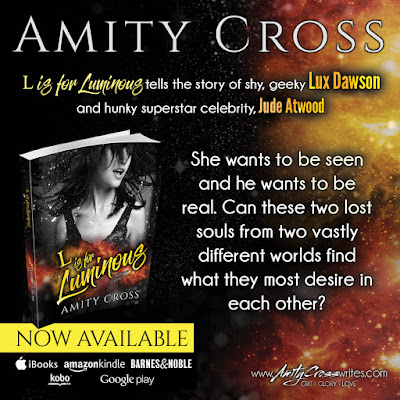 Outside, the air was cool, so I pulled my biker jacket on and flipped up the collar.

I turned at the sound of Jude’s voice. He was leaning up against the wall, his phone in his hand, his gaze firmly on mine. I could still feel the ghost of his body pressed against mine, and I shivered, sinking deeper into my jacket.

“Hey, yourself,” I threw back.

“Are you leaving?” he asked, clearly disappointed, and I wondered if a little dance was all it took to get him going.

“Yeah,” I said with a shrug. “I’ve had enough excitement for one night.” And enough threats from your ex-girlfriend to last a lifetime.

He pushed off the wall. “You’re going home?”

“A lot can happen in a couple of blocks,” he said, narrowing his eyes. He stepped forward, wavering on his feet.

“Exactly how much have you had to drink since I left you in there?” I asked in amusement.

“Am not,” I lied. Well, I’d reverted to tipsy after Tessa had sobered me up with her bitchy presence. I put my hands on my hips. “I bet you a hundred bucks you can’t walk in a straight line.”

“Only a hundred? I think we can do better than that.”

“I think I should be walking you home,” I retorted.

I flushed scarlet, my entire body beginning to zing. “So you don’t fall in a gutter and wake up with your shame all over TMZ, jerk.”

He waved his hand at me. “I’m still walking you home. The air will sober me up a bit.”

He held up his hand and pinched his thumb and forefinger together. “Perhaps a little.”

I shook my head and began walking, Jude falling into step beside me.

I could still feel his body pressed against mine, moving to the music. So close to kissing and throwing everything away.

“You’re a good dancer,” he said, giving me a wink.

I rolled my eyes and glanced away so he couldn’t see the heat in my cheeks. I wasn’t sure it was necessary considering he was a little loose, but it was like a default reaction. You know, like a reflex.

Stopping at an intersection, my mind went back to the moment Tessa shoved her phone in my face and almost bitch-slapped me to the ground. Bloody hell, why should I care what Tessa Donahue thought? Maybe I should care a little if I wanted to have my contract renewed. I hadn’t thought about anything beyond this season of the show. Did I want to come back for another year? Did I want to continue living in this spiral of one-sided lust and heartbreak?

“What are you doing?” Jude asked. He’d gotten to the middle of the road and had come back again. He wound his arm around my waist and guided me across the street.

“Nothing,” I muttered. “I was just thinking.”

We walked in silence after that, and he didn’t let me go until we stood out the front of my block. Unlocking the door, I was gently nudged to the side, and my heart began to speed up.

“What are you doing?” I asked as he stepped into the tiny lobby.

“I’m walking you to your door,” he declared.

He narrowed his eyes and pushed the button for the elevator. “That’s everyone’s door.”

“So specific,” I retorted as the car arrived.

Stepping into the elevator, he sidled up next to me, making the synapses in my brain misfire.

Jude grunted, his eyes on the display above the door. His fingers were worrying the hem of his shirt, and it began to dawn on me that he was nervous. I thought he was drunk? Maybe he was a bit of both. Maybe I was misreading the situation.

The elevator arrived at my floor with a ding, and we walked down the hall to my apartment. Unlocking the door, I turned to Jude.

“Safe and sound,” I declared, edging inside.

He narrowed his eyes and swallowed hard. “Yep.”

We stood there staring at each other like idiots, the air feeling thick. As thick as it had when we were dancing earlier.

Then he stepped forward, a hungry look in his eyes, and I stepped back, moving into my apartment.

Everything that happened in the next second was like I was living in someone else’s life. A dream, a fantasy, a parallel universe.

His mouth was on my lips before I realized what was happening, and I stumbled backward until I hit the wall. I gasped in surprise, and his tongue dove greedily against mine, the lingering tang of alcohol mixing with his taste, the taste that said he was Jude.

His hands shoved into my hair, and he held me firm, his entire body pressing hard against mine. His lips were soft, the stubble that always coated his jaw rasped against my skin…and I kissed him back. I gave him everything I’d been holding onto since the day we met. It rushed out of me like a force of nature that couldn’t be tamed. Like a tsunami, a hurricane, a lightning storm, a raging bushfire, the extinction level atomic blast of a gigantic meteor hitting the earth…

Alive and coursing with reckless abandon.

“Lux,” he moaned against my lips.

So wild, so uncontrollable… Everything ached so much I could hardly bear it.

He moved his lips to my neck, kissing a trail of fire along my skin as his hands stroked the curve of my back. My entire body spoke to his, pushing into his touch, guiding his movements, wanting and needing more with an intensity that had me spinning out of control.

I had no idea… No idea at all. 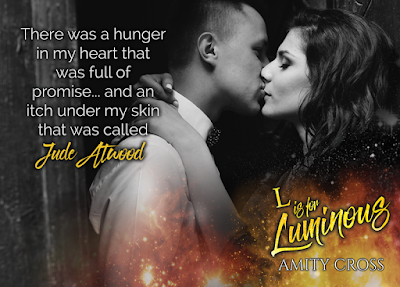 She is the author of wicked stories about rock stars looking for redemption, gritty romances featuring MMA fighters and dark tales of forbidden romance. She loves to write about screwed up relationships and kick ass female leads that don't take s**t lying down.

Amity lives in a leafy country town in southern Australia and can be found chained to her desk, held at ransom by her characters.

Don't send help. She likes it. 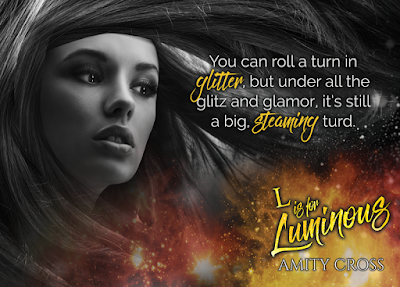 a Rafflecopter giveaway
Posted by Unknown at 6:20 AM