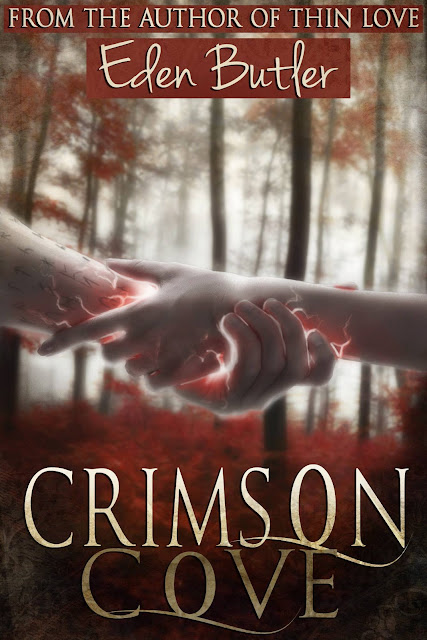 Ten years ago Janiver stole a kiss from the meanest boy in school.

One minute before the tardy bell rang, Bane Illes would slip through the door.

Each day, that dark, dangerous boy gave Janiver Benoit a glance. And when she could not take another quiet stare, or the warmth that look sent over her skin, she took from Bane something he’d never give freely—one lingering, soul knocking kiss.

Ten years later, her family needs her, and Janiver will have to face the one person she promised herself she’d never see again.

The dangerous wizard that might make leaving Crimson Cove the last thing she wants to do.

Amazon US | Amazon UK | Amazon CAN | Amazon AUS
Crimson Cove - Review
I was given book for honest review. Set in the magical town of Crimson Cove Eden Butler tales a tale of magic and mayhem and while it is a paranormal book I consider it a second chance one as well. Jani and Bane have a past and a secret that has been kept from them, so when Bane retrieves Jani to help the town find a stolen object you can imagine that the sparks fly with glances and forbidden touches. Loved how the book eludes to a grievous wrong done to them before she left but never actually states what was done - if you want to know I encourage everyone to read the book in its entirety to find out. Can the past be remembered and forgiven or is it to late? ﻿ 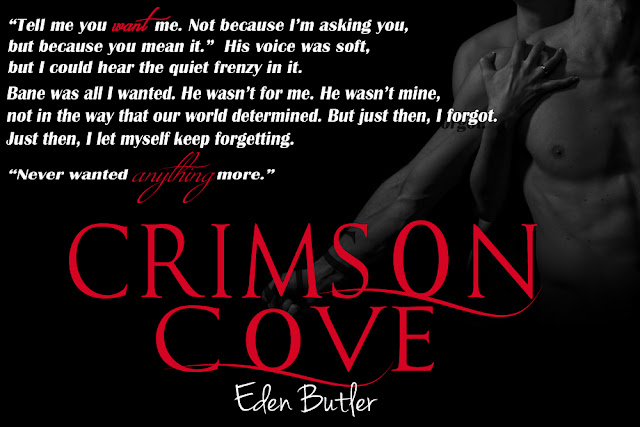 “Your secrets are your own,” he finally said, a little of his confidence dimmed, but his resolve stronger than ever.

Good, I thought. He’ll need it.

One step forward and Bane stared down at me. “Then why do I get the feeling that what’s behind that wall isn’t just for you?”

Beyond us, I sensed the weight of the lines trying to breech across the safeguard Bane had placed inside me. He sensed it too, even nodded toward it when I looked at him, expecting confirmation. But he wanted an answer, didn’t seem to care that his spell had worked on me.

“Don’t go poking, Bane. Not all secrets need telling.”
Bane was only a foot away from me, his mind likely lingering around the confusion of that day, ten years ago, and the heat he thought he’d imagined. But it had been real. Hell, it was still so damn real and even with him tempering the lines from me, Bane seemed to know it too.

“A warning,” he started looking as though he wasn’t sure if he wanted me or wanted to be angry with me. “I may not be able to have complete awareness of your thoughts, but I can tell what direction they’re heading toward.”

“Meaning if I piss you off, I’m gonna know.” I shook my head, not caring if Bane knew how often he pissed me off. “Meaning that if I do something you like,” he moved his gaze down my body, then back up, “Well, I’ll know just how much you like what I do.”

“And if someone else does something I like?” He grunted, but remained silent. “I mean, if say, one of those primal, alpha shifters do something I really, really like…”

“I’ll damn well know.” The clip of his voice was a warning I took to heart.

There was little time left now for us to squabble or argue over what I kept from him so when I turned away, needing the distance, and he grabbed my arm, stopping me, and the shock was quick and, despite knowing him as I did, unexpected. “That daydream…” He pressed his lips together. “Felt damn real.”

My eyes kept steady on my wrist in his grip, as though on their own, they’d decided looking at Bane wouldn’t be smart. “Why are you touching me again?” Finally able to control
myself, I looked up. “The spell is over.”

There was something new, something strange to how Bane pulled me in. The lines weren’t calling me, insisting that I take him, claim him once again. They were, in fact, nothing more than a quiet whisper I could barely make out, begging now instead of insisting. The sensation had no bite, not as it did before Bane’s spell, but there was still a heat between us, that constant energy that no block could keep from us. We were drawn to each other even without the lines’ interference.

“Bane…” He inched closer and I held my breath as that pull—our pull—between us drew us closer. “What am I thinking now?”

He growled, rushing toward my mouth, warming it with just a brush of his lips. “The same damn thing I am.” He gripped my face between his fingers and kissed me hard, scorching against my mouth like he wanted to claim it. God, how I wish he would, and just that thought made that low, deep groan in Bane’s throat transform into a growl of pleasure.

The air around us dropped, the temperatures cooling the wind, bringing brittle leaves and small twigs from the trees around us. Nothing slipped into my thoughts as we came closer, as I forgot that I wasn’t supposed to touch Bane, that he belonged to someone else, that he was meant for something else in which I played no part. But just for that moment, I wanted to take him. I wanted his touch and taste all over me.

At the thought, Bane broke away, his hot, hurried breath fanning down my nose as he rested his forehead against mine. “This spell was an insanely bad idea.”

“Why?” Fingers fisted in his collar, he moved when I pulled him toward me, too eager, too anxious to keep from touching him.

“God, Jani, because now I know you’ve been thinking the same thing I have since the second I walked into your apartment.”

But I knew, I knew that it had all started for us far longer than a few days before.

“Bane…” Tell him no, I thought. Remind him who he is, who you are. But even thinking it was enough to settle him.

“I don’t think I much care,” he stopped me, answering my unspoken question about what would be or what should be. “God help me. I don’t fucking care about any of it.”

Like a flame igniting, like the rush of decision that is never given much thought, a decision that is more instinct than logic, we moved away from ourselves, from the people we were always supposed to be. There was no duty, no honor, no distinctions to be maintained, no expectations that need to be protected. We’d come this close before, the near making of something new, something forbidden, but this time I gave no thought to what would happen if I let Bane forget that I was not for him.

Just one flashing moment where we pulled against each other, where his touch felt like liquid fire on my skin, where my mouth against his throat made that huge man shudder at the feel of it.

It was all it took. Providence, destiny, the twist of some life altering event set in motion by the lines, by the gods, by whatever it was that bent our wills, directed our paths down the roads we took. My declaration, my small lie that I truly didn’t care, was enough to pick apart the moment that might keep us from it. It was enough to ricochet into something that could never be unmade.

That’s when the screaming started.

In the quiet din of darkness, with Bane holding me, devouring my mouth, insisting my body bend this way and that, a scream rent through the moment and torn it to pieces, followed by another, and another.

Eden Butler is an editor and writer of New Adult Romance and SciFi and Fantasy novels and the nine-times great-granddaughter of an honest-to-God English pirate. This could explain her affinity for rule breaking and rum. Her debut novel, a New Adult, Contemporary (no cliffie) Romance, “Chasing Serenity” launched in October 2013 and quickly became an Amazon bestseller. When she’s not writing or wondering about her possibly Jack Sparrowesque ancestor, Eden edits, reads and spends way too much time watching rugby, Doctor Who and New Orleans Saints football. She is currently imprisoned under teenage rule alongside her husband in southeast Louisiana. Please send help.

1.  Lose the weight I gained after I stopped smoking.
It’s been nearly five months since I smoked. I’ve gone from a pack a day smoker to not being able to tolerate the smell. (Seriously, I’ve quickly become an obnoxious former smoker who gets all indignant when someone smokes around me). But in the process of not smoking, the fat kid in me has emerged and I’ve put on 12 pounds. This sucks, especially since I had about 50 to lose already, according to my nutritionist. SO…2016 has started with me kicking the Dr. P’s to the curb and replacing them with crushed ice and water. Four days in and no weight loss yet, but Shaun T and his evilness is due to arrive in my mailbox this week. If I don’t die from exertion, I’m positive that at least I can be rid of the extra pounds


2.  Do at least one thing I’ve never done before.
My husband got this hopeful, excited look on his face when I said this to him and I knew his boy mind had gone somewhere naughty. A quick “Not that, perv” took the grin off his face, but I really would like to try something new. Maybe scuba diving or hiking further in the Tennessee mountains than I did two years ago, maybe I’ll muster up the lady balls to finally ride a roller coaster…who knows? But I’m definitely down for suggestions. Note: I so do NOT do heights. No. Not at all.


3.   Finish two of my series.
Hopefully, the Serenity series and the Thin Love series will wrap up by April. Then I’m on to bigger adventures that I cannot wait for you guys to read.


4.   Do away with ALL negativity in my life.
This one is hard for me. I was raised by a positive woman. My mom, I swear, is Pollyanna. And, for the most part, that has trickled down on me. But there are moments, times when I let the ugliness in the word and the disappointment that inevitably happens into my life to really get me down. But as I’ve gotten older, I’ve realized this does nothing to help me. No negative thoughts or words will ever do anything but weigh you down. So I’ve resolved to keep the negativity far away from my head. What we put out into the universe, is what comes back to us. Right now I’m projecting lots of e-book sales, the body of Christiana Hendricks and Tom Hardy mowing my grass shirtless.


5.  Finish my side project that I know will level up my writing/publishing game.
Did you know that “Eden Butler” isn’t the only name I write under? For years I’ve written fantasy (contemporary) under “my” name. This year I resolve to finish a project, a prequel to a longer series, that I’ve spent months researching and years dreaming about. I am determined to finish it and query it to an agent by year’s end.
So what are your resolutions? What will make 2016 the best year ever for you?

The following goodies are up for grabs!