Melting into You Release 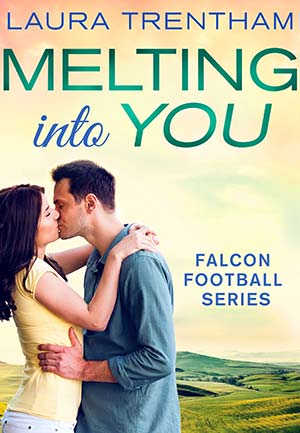 Alec Grayson returns home to Falcon, Alabama, to rebuild his life after a knee injury ended his NFL career. As the Falcon high school quarterback coach, Alec's love for the game is reignited. Meanwhile, he puts his hard-partying past and the betrayal of the people he trusted most behind him, and adopts a hard demeanor. That is, until a spitfire artist with soulful eyes and a body that haunts his dreams gets under his skin and threatens to crack his armor.

Lilliana Hancock is forced to leave her struggling-artist lifestyle in New York and return to Falcon after her father's unexpected death leaves her a decrepit family mansion. Determined to use her skills to turn the home into a successful bed and breakfast, Lilliana is stopped at every turn by the town contractor, who happens to be Alec, the gorgeous and arrogant jock to whom she lost her virginity in college. Except Alec doesn't remember, which infuriates her. Too bad she can't forget the way his body felt against hers or how his heated gaze follows her...

Will they be able to put their pasts behind them for a future together?

The moment she’d been dreading. Without offering an excuse, she led him to the Pepto-Bismol bathroom. She propped a shoulder against the doorjamb instead of following him into the tight space.

The handheld machine he used let out a series of beeps as he checked the outlet. He grunted and dropped to his knees to check under the cabinet. Even from the doorway, Lilliana could see the tangle of wires that Carl hadn’t known what to do with.

Pulling out a flashlight and crunching his shoulders into the tight space, he muttered, “Good Lord.”

Having your inspector utter calls to the Almighty didn’t bode well. After a couple of minutes of grunting, he clicked off the flashlight and reversed his shimmy. Would she need to tear the wall out? Rewire theentire upstairs? She waited for the crushing blow to her plans.

“Dammit!” He jerked as he ducked his head out from under the cabinet. Crouching on the nauseating pink tiles, he fingered a tear in his shirt. Blood oozed, but she couldn’t tell how long or deep the scratch was.

“Goodness, how bad is it?” Falling to her knees, she tugged his shirt out of his pants, lifting it to reveal his wound. She traced smooth, firm skin alongside a long, shallow scratch. Her voice creaked a little. “It’s not bad. Let me dab on some ointment, and I can stitch the tear in your shirt. It’ll only take a minute.”

She went to work on his shirt buttons from the bottom, her breathing pacing faster to match the beat of her heart.

“Stop. I’m fine. I have other shirts.” His words sounded rushed, panicked.

He grabbed at both her wrists, but the movement only flipped his shirt apart, exposing the bottom half of his chest. Something dark edged from the checked cotton. He froze, his hands loosening. She finished working his buttons open and spread the shirt to expose his entire chest.

“Oh. My. God.” Her words compressed out of lungs that held no air.

She wasn’t in shock from the defined muscles of his chest. That she’d expected. It wasn’t even the sexy dusting of hair trailing into the waistband of his pants. What hypnotized and held her rapt was the enormous tattoo that covered one side of his torso.

The vibe was difficult to nail down. Tribal with some Picasso cubism thrown in. Script played peekaboo along his side, obscured by the shirt hanging on the curve of his shoulders. What words would a man like him pick to inscribe on his body? One thing was certain—his tattoo was a work of art. Now she was less interested in his warm, man-scented skin than what was drawn on it. Impatiently, she pushed his shirt off his shoulders to hang at his elbows.

The tattoo extended to his shoulder and over his upper arm, stopping at mid-biceps like a permanent sleeve. In all the football practices she’d attended, he’d never revealed his ink. Unlike the boys or other coaches, he wore long-sleeved workout gear and used a towel tucked into his shorts to wipe away sweat, but she’d chalked his habits up to being a quarterback and needing a protected throwing arm and dry hands.

Never in a million years would she have guessed what preppy, uptight Alec Grayson had up his sleeve. Literally.

“It’s old. From when I was young and stupid. Most of my teammates in Philly had tats and I thought I was the sh—” He muttered to cover the curse word and ran a hand through the top of his hair, mussing the regimented style. “I’m planning to get it lasered off.”

Clarity struck like a shot of adrenaline to her heart. He was ashamed or at least embarrassed by the tattoo. With trembling fingertips, she skimmed the outer line of a dark black swirl of ink tracing the muscle of his pectoral. At first contact, the muscle jumped, and he flinched away as if in physical pain.

“Don’t you dare,” she repeated in a whisper leaning in to follow the line with her lips.

I was born and raised in a small town in Northwest Tennessee. Although, I loved English and reading in high school, I was convinced an English degree equated to starvation! So, I chose the next most logical major - Chemical Engineering- and worked in a hard hat and steel toed boots for several years. Now I live in South Carolina with my husband and two children. In between school and homework and soccer practices, I love to get lost in another world, whether it's Regency England or small town Alabama.