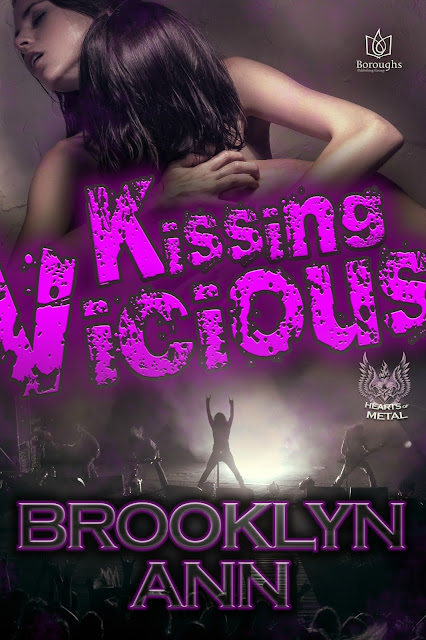 Aspiring guitarist Kinley Black is about to get her first big break—as a roadie for Viciöus, her favorite heavy metal band, and for the rock god she always dreamt might make her a woman.

At 15, aspiring guitarist Kinley Black wished she were a boy. At 16, after hearing Quinn Mayne sing, she wanted him to make her a woman. Now, at 22, her dreams have come true. Quinn’s band Viciöus needs someone to lug their amps around the country, to strive and sweat with the guys. She just has to act like one of them.

AND THE ROCK GOD

Quinn had to admit the new chick could pull her weight, but that didn’t mean his road manager made the right choice. Taking a hottie on a heavy metal music tour was like dangling meat in front of a pack of feral hounds—and Quinn could be part dog himself. But more surprising than her beautiful body are Kinley’s sweet licks, so that no man could help but demand a jam session. Quinn will soon do anything to possess her, and to put Kinley in the spotlight where she belongs. And to keep her safe and sound from the wolves.

“C’mon, baby, just let me feel ’em and I’ll let you through.” The leering roadie uncrossed his arms to reach forward.

Kinley choked back a groan of revulsion and stepped away.

Her pulse had been jacked up, her steps light with anticipation as she’d gone backstage to interview her favorite band. This interview would be her website’s biggest feature to date.

And now this asshole roadie was ruining her elation with his disgusting come-ons.

“It’s not the seventies anymore. Let me through.” She waved her laminated pass. “I have a scheduled interview.”

There. That was as diplomatic as she could be. It wouldn’t do to piss off the crew if she wanted to talk to the band, but this Neanderthal made it hard to be nice. With any luck, he’d back off and badger someone else. But considering those piggy eyes and that “Female Body Inspector” shirt, a woman would have to be desperate to allow his grimy fingers near her. The fact that a band as awesome as Viciöus had such a prick in their employ was beyond depressing.

She sighed. After she got her interview, it would all be worth it. Her ears still pounded from the glorious shredding guitar riffs, the throbbing bass, and the impossible speed of the drums. They had been gods on stage and now she was going to meet them.

“Sorry, sugar. Rules are rules. I gotta make sure the band’s getting Grade A titties.” With speed belying his sluggish appearance, he shoved those sausage fingers forward, reaching for her breasts. She swatted his hand away.

Fury boiled from her toes up. “If you touch me again, I’ll wipe the floor with your ass.”

The roadie’s laughter, like from a cheesy sitcom, rang in her ears. “Sounds kinky.” The moron actually stepped closer.

Kinley rolled her eyes. If it weren’t for this once-in-a-lifetime chance, she would have answered him with an uppercut. “A little help here?” she shouted, trying to salvage the situation.

The mass of gawkers muttered and looked in all directions, avoiding her gaze. Some asshole in the crowd yelled, “Show your tits!”

The roadie grinned and nodded in agreement.

“Thanks,” she muttered, embittered but unsurprised.

After what seemed like hours of dancing out of the caveman’s reach, a man approached. Her eyes widened. It was none other than Curtis Scrimm, lead guitarist of Viciöus.

He pushed his dirty blond locks from his face and grinned. “What’s going on?”

She struggled to meet his gaze while keeping one eye on the roadie. “I have a pass, but this guy’s molesting me and won’t let me through. Could you please tell him to stop?”

Kinley waved her laminate in case he hadn’t noticed. He leaned forward and gazed at it with squinty, glazed eyes.

The roadie gave him a pleading look. “C’mon, Curt, she won’t play the game.”

Curt shrugged helplessly, eyes darting between Kinley and the roadie, then back at the swarm of groupies visibly panting after him. One already had her breasts bared.

“I’m serious,” Kinley growled. “I’ll kick his ass if he touches me again.”

Her harasser licked his lips. “Oooh. I like it when they fight.”

The guitarist shook his head, blinking at the roadie. “Harry, are you drunk on the job again? I thought Gaffer warned you. Besides, she doesn’t look like she has much anyway…” He trailed off as the groupies slinked closer, eyes feral with curiosity.

Kinley’s chest tightened with trepidation. Where were the other security guys? Where was the rest of the band?

The roadie reached for her again.

She jumped out of his way, stomach churning with anxiety. Then again, maybe it was a good thing the rest of the band wasn’t here to witness this disaster. The situation was quickly getting out of control. And it looked like she wouldn’t be getting her interview after all.

“I’ll fuck him up,” she stammered, flipping her braid over her shoulder. “I swear!”

Curtis chuckled, eyes roving over her body, visibly assessing her odds. Though she was tall and fit, she was lean, and the roadie outweighed her by at least eighty pounds. “Lady, if you can kick Harry’s ass, you can have his job.”

Her breath left her lungs. Kinley had been prepared to just break the roadie’s nose and walk out, but now the proverbial carrot had been dangled.

A chance to work for Viciöus? Hell, a chance to be back in music?

A wave of longing rushed over her to once more be part of it all. For that pump of adrenaline, the roar of the crowd, the heat of the stage lights—the soul searing passion of the music. To return to that life, even if only on the fringes, Kinley would do anything.

Beating this perverted scumbag to a pulp would be no hardship.

She dropped into a fighting stance and slightly relaxed her fists, the better to do more damage.

One last time, she tried for diplomacy. “As much as I’d love to work for you, it really would be better to call him off and let me—”

Her fist connected with the roadie’s nose and she felt the satisfying crunch. He bellowed like a boar and blindly swung a ham-like fist.

Kinley easily ducked the punch and followed up with a knee to his gut.

He doubled over with an agonized groan but surprised her with an uppercut that thankfully missed her jaw and instead struck the side of her head. Kinley stumbled back, one ear ringing from the blow, the other echoing from the noise of her audience. Are those cheers or jeers?

Her mind struggled to unscramble. Another punch whistled past her head and she dodged it just in time. Her heel slammed into Harry’s kneecap and he went down shrieking.

This time Kinley didn’t give him a chance to recover. Her fists pummeled his face like the punching bag she practiced on in her garage.

Savage glee infused her with every strike. He collapsed after another blow to the jaw, but she wasn’t finished. Kinley raised her fist.

A voice rang out: “What the fuck is going on here?”

Reality crashed down upon her. Suddenly, she could see how insane she must appear. 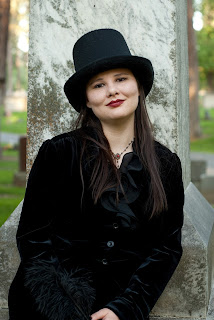 Formerly an auto-mechanic, Brooklyn Ann thrives on writing Romance featuring unconventional heroines and heroes who adore them. After writing historical paranormal romance in her critically acclaimed “Scandals with Bite” series and urban fantasy in her “Brides of Prophecy” novels, she now explores the chaotic realm of heavy metal music— a difficult world to find love in.